Apple today announced that the original film "Finch," starring Tom Hanks in its titular role, will premiere on Apple TV+ on Friday, November 5 and shared a first-look image from the film. 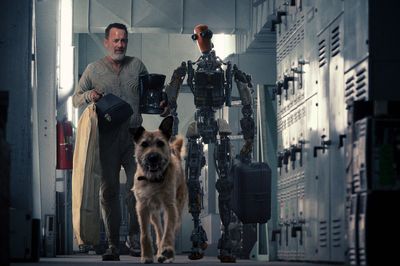 The first look at "Finch," shared by Apple.
The film, which is anticipated to be an awards season contender, revolves around a man, a robot (played by "Get Out" actor Caleb Landry Jones), and a dog that form an unlikely family. Apple describes the film as follows:

In "Finch," a man, a robot and a dog form an unlikely family in a powerful and moving adventure of one man's quest to ensure that his beloved canine companion will be cared for after he's gone. Hanks stars as Finch, a robotics engineer and one of the few survivors of a cataclysmic solar event that has left the world a wasteland. But Finch, who has been living in an underground bunker for a decade, has built a world of his own that he shares with his dog, Goodyear. He creates a robot, played by Jones, to watch over Goodyear when he no longer can. As the trio embarks on a perilous journey into a desolate American West, Finch strives to show his creation, who names himself Jeff, the joy and wonder of what it means to be alive. Their road trip is paved with both challenges and humor, as it's as difficult for Finch to goad Jeff and Goodyear to get along as it is for him to manage the dangers of the new world.

Apple won the rights to Finch earlier this year after bids from multiple streaming networks. It will be the second film starring Hanks to debut on ‌Apple TV+‌, following last year's war film "Greyhound." Finch arrives on ‌Apple TV+‌ later this year on November 5, adding to ‌Apple TV+‌'s growing selection of films.

Earlier today, Apple also shared a discussion to promote "CODA," another of its original films that is scheduled to premiere on ‌Apple TV+‌ on August 13. The discussion between the film's actors, including Marlee Matlin, Troy Kotsur, and Daniel Durant, and writer and director Siân Heder, covered incorporating American Sign Language on set, the significance of authentically casting and presenting people with disabilities, and the universality of stories.

orbital~debris
I don't even need to read the synopsis. A cool-looking robot design and Tom Hanks, in a movie. ?

EDIT: I read the synopsis. Postapocalyptic. Road trip. Perilous. Challenges. Teaching robot about humanity. I suspect this is going to make me cry.
Score: 20 Votes (Like | Disagree)

fixed it for you

I love Tom Hanks and enjoyed Greyhound. It may not be on the same caliber as Das Boot, The Hunt for Red October, or Crimson Tide. But it surely was enjoyable, great for COVID-19 stay-at-shelter days. A majority of movies on Apple TV+ are either documentaries or "serious." I like to see more casual fare like Finch and The Shrink Next Door.

On a related note, Apple TV+ Originals tab on Apple TV app is getting crowded. I would like to see "movies", "TV series", and "nonfiction/documentaries" get their own tab page. Lumping all movies as "feature films" makes it difficult to figure out their genre.
Score: 8 Votes (Like | Disagree)
Read All Comments

Monday August 9, 2021 7:09 am PDT by Joe Rossignol
Apple and Netflix are among the bidders for an "Oscar bait" film starring Jennifer Lawrence as the late Hollywood talent agent Sue Mengers, according to Variety. Bidding for the film has reportedly surpassed $80 million and could climb higher. Mengers was a prominent Hollywood "superagent" from the 1960s through the 1980s, representing some big names in acting like Barbra Streisand and Burt...
Read Full Article • 37 comments

Monday August 23, 2021 11:11 am PDT by Juli Clover
Upcoming Apple TV+ movie "The Tragedy of Macbeth" is set to premiere at the BFI London Film Festival on the final day of the event, Sunday, October 17. Apple also plans to offer preview screenings of the film at London Film Festival partner cinemas across the UK. Written by Joel Coen, "The Tragedy of Macbeth" is set to star Denzel Washington and Frances McDormand. Filmed entirely in black ...
Read Full Article • 29 comments

Wednesday August 4, 2021 12:26 pm PDT by Juli Clover
Apple has established a deal for the rights to "Argylle," an upcoming spy thriller from Matthew Vaughn, reports Deadline. A film package is nearing completion, and Apple is expected to pay around $200 million. "Argylle" is based on the upcoming spy novel of the same name from author Ellie Conway. It follows the world's greatest spy in a globe-trotting adventure, and shooting is set to start...
Read Full Article • 45 comments

Friday January 21, 2022 11:23 am PST by Joe Rossignol
Apple TV+ today shared a humorous new ad called "Everyone but Jon Hamm" that is set to air during NFL playoff games this weekend, according to Adweek. In the ad, actor Jon Hamm sits in a lavish home and scrolls through Apple TV+ while humorously complaining about how Apple's original TV shows and films feature numerous big-name celebrities, except for himself. Hamm refers to many stars...
Read Full Article • 92 comments

Monday March 15, 2021 6:20 am PDT by Joe Rossignol
Apple TV+ today picked up its first-ever Oscar nominations, with the Tom Hanks film "Greyhound" nominated for "Best Sound" and the animated Cartoon Saloon film "Wolfwalkers" nominated for "Best Animated Feature Film." "Greyhound" is up against some tough competition, including the Pixar film "Soul" on Disney+ and the Netflix film "Mank," along with "News of the World" and "Sound of Metal."...
Read Full Article • 44 comments