Back in April, Apple announced a $430 billion investment over the next five years to create more than 20,000 new jobs as the company continues to expand. One significant piece of that plan is a new engineering and research center in North Carolina where Apple will be investing over $1 billion and hiring at least 3,000 employees. 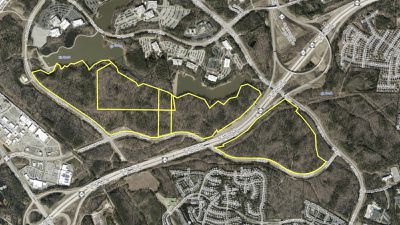 Assemblage of seven properties in Research Triangle Park owned by Apple
Apple actually acquired the land for its new North Carolina campus in late 2018, purchasing about 280 acres in Research Triangle Park (RTP) near the state capital of Raleigh for around $50 million, but while Apple announced plans for a new campus in Austin, Texas, around that time, it remained silent on its RTP plans until this year.

It will take several more years for Apple's campus in RTP to get up and running, so the company is moving forward with plans for over 200,000 square feet of temporary space in nearby Cary, MacRumors has confirmed.

Apple will be taking the most recently constructed facility in a three-building complex built over the past eight years for insurance company MetLife. With the global health crisis impacting corporate facility needs around the world, MetLife has consolidated its Cary operations into two buildings on the campus and made the entire third building available for lease.

Apple will be taking Building 3 (at left) on MetLife campus in Cary, North Carolina
Based on plans filed with the Town of Cary, Apple will be taking the entire seven-floor "MetLife III" building, which totals over 220,000 square feet. An initial phase of buildout for Apple includes the first three floors of the building, but documents from the project architect indicate that Apple has the "intent of occupying the entire building in the near future."

Development plans for Apple's renovation were filed with the town at the end of June and were approved on July 8 and 9, clearing the way for construction to begin. Filings indicate that initial renovations will cost nearly $5.5 million and are fairly limited in scope, with Apple largely retaining the open plan already in place and previously used by MetLife.

Second-floor layout (click for larger)
Apple will be doing select demolition of floor and wall coverings in certain areas of the first three floors and reconfiguring some spaces to customize things to its own liking, but Apple will be avoiding major changes and expenses given that its tenancy is expected to be rather short-lived.

There don't appear to be any signs of progress on Apple's future RTP campus yet, but that's not terribly surprising considering the announcement was made just a few months ago and Apple is likely continuing to work with architects and others on finalizing its plans.

DanTSX
Interesting move in a work-from-home world. I hope apple doesn’t have their heads in the sand regarding office space.
Score: 14 Votes (Like | Disagree)

Interesting move in a work-from-home world. I hope apple doesn’t have their heads in the sand regarding office space.

$1 billion to make space for 3,000 employees to work together.

They should build an Apple Town instead. $300,000 per employee is an extremely generous budget for building houses…
Score: 13 Votes (Like | Disagree)

w5jck
Unless a company is building a laboratory, manufacturing plant, or something similar, I have to question why they would spend money for a campus. Working from home should become the norm instead of campuses filled with building and offices burning electricity, cars polluting the environment while transporting employees too and from work. What a wast of time, money, and more importantly, the environment. They should build small campuses for team meetings when necessary, but not to house an entire workforce.

I know some companies are worried about productivity from home workers, but they don't need to be. Pay the employees by the amount of work and quality of work they produce. Before I retired, I had people in my departments who could turn out more work, and of better quality, in 10 hours time than others did in 40 hours. I had no say over who got paid what, but if I had I would have paid the 10 hour super producers of work more than the 40 hour dead weights.
Score: 11 Votes (Like | Disagree)

hatchettjack
I guarantee us in North Carolina will have no problem showing up to work 7 days a week! thank you apple! they might just be able to sell the spaceship and ditch california altogether???
Score: 11 Votes (Like | Disagree)

trevorep
Holy cubical hell. People in these spaces would be better off if Apple let them work at home.
Score: 10 Votes (Like | Disagree)

ChaosBlaze
I can see my house on the bottom of that map. I can’t wait for my house value to go up to astronomical levels.
Score: 10 Votes (Like | Disagree)
Read All Comments

French News Channel Gets Rare Access Into Apple Park, 'One of the Most Secret Places on the Planet'

Monday December 20, 2021 2:45 am PST by Sami Fathi
French news channel TF1 has gained rare and exclusive access into Apple Park, calling it "one of the most secret places on the Planet" while speaking to top Apple executives, such as its senior vice president of marketing, Greg Joswiak, and more. In Cupertino, California, Apple Park‌ is rarely accessible to anyone who isn't an Apple employee. Before the global health crisis, Apple held...
Read Full Article • 56 comments

Tuesday March 15, 2022 2:12 pm PDT by Juli Clover
A small number of Apple employees appear to have been evacuated from the Apple Park campus in Cupertino, California, according to NBC Bay Area. There is little information at this time, but the news site says that a "portion" of the campus was evacuated. According Santa Clara County Fire Department Captain Justin Stockman, first responders found an envelope containing an unknown white...
Read Full Article • 51 comments

Tuesday July 20, 2021 4:40 am PDT by Hartley Charlton
Apple is looking to lease a large production campus in Los Angeles for Apple TV+, according to the Wall Street Journal. Apple apparently told real-estate development executives about its intention to lease a Los Angeles production campus, presumably for Apple TV+. The production hub could exceed half a million square feet in size since it needs to provide enough space to produce multiple TV...
Read Full Article • 39 comments