Apple on Thursday announced it will invest $1 billion to build a new campus in Austin, Texas.

Located less than a mile from its existing facilities, the 133-acre campus will initially accommodate 5,000 additional employees, with the capacity to grow to 15,000, which would make Apple the largest private employer in Austin. 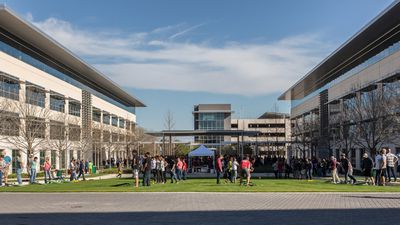 One of Apple's existing facilities in North Austin

"Apple is proud to bring new investment, jobs and opportunity to cities across the United States and to significantly deepen our quarter-century partnership with the city and people of Austin," said Tim Cook, Apple's CEO. "Talent, creativity and tomorrow's breakthrough ideas aren't limited by region or zip code, and, with this new expansion, we're redoubling our commitment to cultivating the high-tech sector and workforce nationwide."

In its press release, Apple said jobs created at the campus would include a wide range of functions, including engineering, R&D, operations, finance, sales, and customer support. At 6,200 people, Austin already represents the largest population of Apple employees outside Cupertino.

"Apple is among the world's most innovative companies and an avid creator of jobs in Texas and across the country," said Texas Governor Greg Abbott. "Their decision to expand operations in our state is a testament to the high-quality workforce and unmatched economic environment that Texas offers. I thank Apple for this tremendous investment in Texas, and I look forward to building upon our strong partnership to create an even brighter future for the Lone Star State."

In addition to the new campus, Apple announced plans for a general expansion of operations over the next three years in cities across the United States, including Pittsburgh, New York, and Boulder. Apple also said it will establish new sites in Seattle, San Diego, and Culver City.

Apple said it also plans to invest $10 billion in U.S. data centers over the next five years, including $4.5 billion this year and next.

dan110
This seems great on the surface, but I'm concerned that the influx of Californians will have a negative impact on Texas' state capital, the health of the region's real estate market, taxes, and traffic. Plus, Austin has already lost a significant portion of its charm.

I hope we can find balance with this level of change.
Score: 18 Votes (Like | Disagree)

jovada
What do they all do? So many employees and so little output.
Score: 13 Votes (Like | Disagree)

I don't fully understand this. I'm not saying its wrong, but they just finished a multibillion spaceship looking building in campus that probably has so much room to spare, why not use that

Most of the Xs are in Texas?

This map doesn't include retail locations for some reason....

maflynn
I don't fully understand this. I'm not saying its wrong, but they just finished a multibillion spaceship looking building in campus that probably has so much room to spare, why not use that
Score: 10 Votes (Like | Disagree)

I don't fully understand this. I'm not saying its wrong, but they just finished a multibillion spaceship looking building in campus that probably has so much room to spare, why not use that