A year to the day after Apple announced plans to spend $1 billion on a new corporate campus in Austin, Texas, to initially support 5,000 employees with the potential to grow to 15,000, television station WRAL in Raleigh, North Carolina, has shared an update and a few new details related to North Carolina's attempts to attract the new campus. 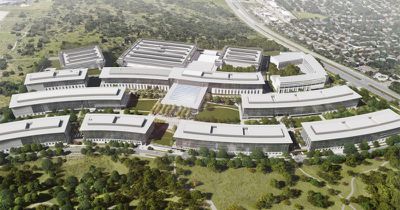 Rendering of Apple's upcoming Austin campus
While it didn't conduct a public competition like Amazon, Apple was open about its plans to construct a new corporate campus, announcing its intentions in January 2018. A number of cities emerged as top contenders to land Apple's new campus, but by May 2018, sources were reporting that it was all but a "done deal" that the new campus would be located in North Carolina's Research Triangle Park (RTP) near Raleigh and Durham, with a temporary location for up to 1,000 employees planned for an existing office building in nearby Cary.

Months went by without an official announcement from Apple, and with Apple ultimately revealing the campus would be built in Austin, many have wondered what went wrong in what appeared to be late-stage negotiations between Apple and North Carolina.

The December announcement seemed to surprise the governor and state legislative leaders, who hours later released a joint statement touting economic growth in North Carolina and pledging to "keep doing everything we can" to attract jobs. [...]

Since then, there's been little explanation about how or why the deal dissolved by year's end.

"Apple and companies like it are very sensitive to information getting out, and there's a possibility that could have hurt the negotiations with Apple a year ago," he said.

Even since the Austin announcement, there have been some curious developments in North Carolina that have hinted Apple may still have plans for the area. Most notably, in December 2018 just weeks after the Austin announcement, a mysterious entity known as Acute Investments purchased several tracts of land in RTP totaling around 280 acres, a massive investment that did not come with any public announcements. The Acute Investments representative listed on the deeds for the properties is local attorney Bruce Thompson, who is registered as a lobbyist for Apple, among other companies.

Assemblage of seven properties in Research Triangle Park owned by Acute Investments and "controlled by Apple"
As a result, Apple has long been suspected of being the mystery buyer in RTP, and today's report from WRAL indicates that North Carolina Commerce Secretary Tony Copeland has finally confirmed that the land is indeed "controlled by Apple."

In an interview with WRAL News last week, Commerce Secretary Tony Copeland declined to provide specifics about the state's active recruitment of Apple. But he did point to a purchase of about 280 acres of Wake County land in Research Triangle Park for almost $50 million in late December 2018, just weeks after Apple's Austin announcement. [...]

Reached this week by phone, Thompson declined to comment.

But Copeland confirmed in the interview that the land is "controlled by Apple."

In addition, the state of North Carolina continues to refuse to release any information regarding its negotiations with Apple for the new campus, claiming that the project remains "open." Governmental authorities are typically required to release information to the public about their corporate recruitment efforts once a given project has ended, but North Carolina continues to insist the Apple project, known by its code name of "Project Bear," has not been closed.

So given that the new campus has been announced for Austin and ground has now been broken there, it's unclear what Apple's plans are for North Carolina. Are negotiations actually still underway for yet another Apple campus to be located in RTP, or is the continued "open" status of the project simply a ploy by Apple to try to keep its negotiations secret for as long as possible? And why spend tens of millions of dollars on RTP land when Austin had already been chosen?

Is Apple looking at yet another significant campus in the near future, or is it banking land and leaving negotiations with North Carolina open as a backup plan or to provide options for much further down the road? It's not clear when we'll have answers to these questions, but given Apple's appetite for office space, it would not be surprising if the company finds itself looking to expand again in the not too distant future.

Austin is a good choice. The South is not.

Damn I must have forgot that Austin, Texas left the south magically. That's crazy.
Score: 10 Votes (Like | Disagree)

Northbynorthwest
Austin is a good choice. The South is not.
Score: 2 Votes (Like | Disagree)

Eauboy
While based on latitude Austin is a southern city it, and Texas as a whole, has little in common culturally with the states to its east. That's like saying LA is southern.

Damn I must have forgot that Austin, Texas left the south magically. That's crazy.

That might explain why they're *just now* cutting under NC-540 to connect Louis Stephens Dr to the remainder of ...Louis Stephens Dr. I swear our DOT is run by a bunch of thumb-up-the-butt morons.. why didn't they just plan to do that when they built the highway? They KNEW the road was there; they actually CUT IT when they built the highway and buried it under rock and dirt! Now they gotta blast through it... idiots.

The two pieces of Louis Stephens were never connected. When the northern part was constructed in the early 2000s, it dead ended at Little, which also ended at that intersection. On the southern side, it was a dirt road that dead ended at a farmhouse south of where 540 eventually cut through. Only now is the old dirt road being converted to modern street even within the Breckenridge neighborhood.

540 was built with bridges over where Louis Stephens was going to be connected. They have some dirt on either side of 540 to move to make the connection that's now going through, but 540 itself was absolutely built to accommodate it.
Score: 2 Votes (Like | Disagree)

craigmak
Interesting, I live about 30 minutes from there. Hope they come and do something with it. I always figured this would be a way for those Duke guys to write-off the tickets and travel to the basketball games.
Score: 1 Votes (Like | Disagree)

OriginalMacRat
San Francisco bay area is getting too expensive.

Logical to divest in California rental properties and ramps up in cheaper states.
Score: 1 Votes (Like | Disagree)
Read All Comments