The latest research from Consumer Intelligence Research Partners (CIRP) shows that all four iPhone 12 models accounted for 63% of total iPhone sales in the United States in the quarter ending June 2021. 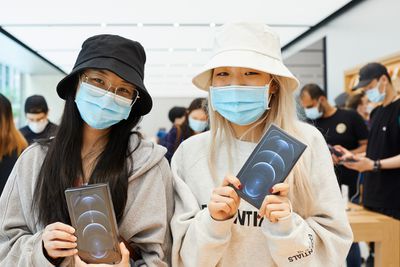 The highest-end iPhone 12 Pro Max tied with the year-old iPhone 11 for the largest share of any single model at 23%, while the iPhone 12 mini and iPhone XR had the smallest share, each at 5%, according to CIRP. As pandemic-related restrictions ease in the United States, the Chicago-based research firm said increased consumer spending correlated with consumers shifting to more expensive iPhone models.

"Apple did very well as it emerged from the COVID-19 pandemic," said Josh Lowitz, a CIRP co-founder. "Increased consumer spending correlated with consumers shifting to more expensive iPhone models as they retired older phones and shopped more at Apple's own retail locations to buy those iPhones."

The shift to more expensive models resulted in the iPhone's average selling price in the United States rising to $869 in the June 2021 quarter, added Lowitz.

The research note also indicates that Apple experienced a significant increase in iPhone sales through its retail operations, including both physical stores and online. In the June 2021 quarter, 27% of iPhone sales in the United States were completed through Apple, compared to a previous high of 21% in September 2020, according to CIRP.

CIRP bases its findings on its survey of 500 customers in the United States who purchased an iPhone, iPad, Mac, or Apple Watch in the April-June 2021 period.

svish
I have the 12 Pro Max. It is the best iPhone I have had till date. Really enjoy using it
Score: 8 Votes (Like | Disagree)

You forgot the words "magical" and "ahhhmazing" ?
Score: 7 Votes (Like | Disagree)

TheYayAreaLiving ?
iPhone Pro Max is the best iPhone Apple has ever made, period.
Score: 6 Votes (Like | Disagree)

boak
The 11 is really crushing it
Score: 5 Votes (Like | Disagree)
Read All Comments

Thursday October 28, 2021 2:41 pm PDT by Juli Clover
During today's earnings call for the fourth fiscal quarter of 2021, Apple CEO Tim Cook said that Apple is "working feverishly" to boost iPhone 13 supplies. Cook said that Apple feels "very very good" about where demand is at for the iPhone 13, in terms of sales compared to the iPhone 12. Supplies are constrained, though, and Apple has not been able to meet demand. Initial supplies of the...
Read Full Article • 47 comments