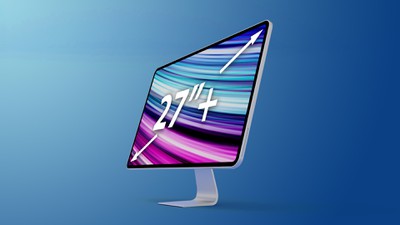 Writing in the latest instalment of his Power On newsletter, Gurman says the fact that Apple recently increased the screen size for the smaller ‌iMac‌ from 21.5 to 24 inches suggests to him that the 27-inch model could see an equivalent size increase.

I absolutely still believe that a larger, redesigned iMac to replace the Intel 27-inch models is en route. Apple increasing the screen size of the smaller model from 21.5 inches to 24 inches seems to indicate that the 27-inch model could see a size increase as well. I don't think, however, that Apple will launch the larger model with the same M1 chip that's in the smaller model. It likely will be an M1X, the beefier version of the current M1, or an M2X.

Apple has been working on a larger ‌iMac‌ with in-house processors for some time, but development of that version was reportedly paused to let Apple focus on releasing the redesigned 24-inch model, which was announced in April.

The 27-inch Intel models that remain in Apple's lineup launched in August 2020, suggesting they are reaching the end of their production cycle.

In a separate newsletter tidbit, Gurman also played down the idea that Apple could bring Touch ID to the Apple Watch one day. Gurman conceded that he could see the utility of ‌Touch ID‌ in the Apple Watch to approve app and media download payments, but said he didn't see that happening "any time soon, if ever."

What a ridiculous non-story, backed by literally nothing.

Tovenaar
This sounds like pure speculation. We can all just make up our own thoughts about what Apple is planning next.
Score: 16 Votes (Like | Disagree)

Serban55
Lets hope this one will keep the chin to make all the ventilation and cooling away from the display
Score: 13 Votes (Like | Disagree)

Tuesday July 6, 2021 5:58 am PDT by Hartley Charlton
Apple is planning to launch the "M2" chip with redesigned MacBook Air models in the first half of 2022, according to the leaker known as "Dylandkt." On Twitter, Dylandkt claimed that a new MacBook Air model is "on track" to launch in the first half of 2022, featuring an M2 chip and a more colorful design. They also claimed that the "M1X" chip is being reserved for high-end "Pro" Macs, which...
Read Full Article • 238 comments

Friday June 18, 2021 2:06 am PDT by Sami Fathi
Intel may see its market share fall to a new low next year, in large part thanks to Apple's decision to move away from using Intel processors in its Mac computers and instead use Apple silicon. Apple announced last year that it would embark on a two-year-long journey to transition all of its Mac computers, both desktops, and laptops, to use its own in-house processors. Apple is expected to...
Read Full Article • 163 comments