Since this article was published, Nanoleaf reached out to MacRumors to explain that the information was incorrectly shared early in Europe, and that Thread Border Router support will be in fact be rolled out next month.

Nanoleaf, the company that makes wall-mounted modular light panels in various shapes, today rolled out Thread border router support for its Shapes and Elements light panels, which can be arranged in multiple positions. 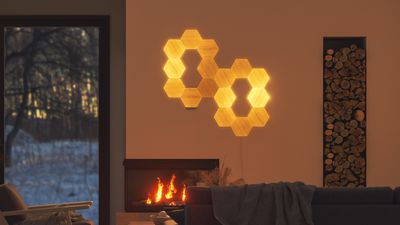 As a quick explainer, Thread is a low latency and low power mesh-like network for smart devices. Unlike Bluetooth and Wi-Fi, the Thread standard doesn't depend on a router or hub. Instead, the smart device itself extends the network by talking to other Thread-enabled devices, thereby boosting the signal between them.

The new Nanoleaf Thread border router support also means Android users will be able to control the Essentials devices, too. Other devices that work with Thread include smart home products from Eve, the Nest Hub Max, and Nest Wi-Fi by Google.

A.wang28
I appreciate the company's honesty in showing the cable in their promo photos. Most companies would do all sorts of trickery to hide it.
Score: 8 Votes (Like | Disagree)

the only flaw with these is always going to be the ugly cable running down the wall.

Yes, they need to include some of those invisible wires that come with wall-mounted TVs and speakers.
Score: 5 Votes (Like | Disagree)

hellosil
Thread becoming more standard is great!
Nanoleafs products are more interesting to me because of this.
Score: 2 Votes (Like | Disagree)

chenks
the only flaw with these is always going to be the ugly cable running down the wall.
Score: 2 Votes (Like | Disagree)
Read All Comments

Thursday August 19, 2021 10:19 am PDT by Juli Clover
Nanoleaf today announced the addition of Thread Border Router technology to the Nanoleaf Shapes and Elements Controllers, with the functionality available through a firmware update in the Nanoleaf app. With the Nanoleaf Border Router, Nanoleaf Essentials devices will be able to connect to the Thread network automatically when the Shapes or Elements Controller is connected to WiFi....
Read Full Article • 24 comments

Wednesday February 24, 2021 2:08 am PST by Tim Hardwick
Dutch company Coulisse is working with Eve Systems to launch a range of HomeKit-compatible smart window covering motors. According to HomeKit News, the new range will include wireless motors to work with roller blinds, Venetian blinds, cellular shades and curtains. Notably, they will also be the first product of their kind to support the Thread wireless protocol, of which Apple is a...
Read Full Article • 25 comments

Tuesday October 19, 2021 8:09 am PDT by Mitchel Broussard
Amazon today has Apple's 256GB Wi-Fi 12.9-inch iPad Pro for the new low price of $999.00, down from $1,199.00. The iPad Pro is shipped and sold directly from Amazon, and it's in stock today. Note: MacRumors is an affiliate partner with some of these vendors. When you click a link and make a purchase, we may receive a small payment, which helps us keep the site running. The new sale is...
Read Full Article • 5 comments

Tuesday October 12, 2021 6:46 am PDT by Joe Rossignol
Ecobee today announced that its HomeKit-enabled SmartThermostat with voice control is gaining "Hey Siri" support with a free software update that is beginning to roll out now and will be available over the next few weeks for all users. "Hey Siri" support allows users with a HomePod or HomePod mini to control the SmartThermostat with voice commands for tasks such as setting the temperature...
Read Full Article • 85 comments

Friday October 15, 2021 7:59 am PDT by Mitchel Broussard
Today we're tracking solid discounts on the 2021 iPad Pro in both 11-inch and 12.9-inch configurations. You'll have a chance to save up to $100 on these models, and this sale includes both Wi-Fi only tablets and cellular models. Note: MacRumors is an affiliate partner with Amazon. When you click a link and make a purchase, we may receive a small payment, which helps us keep the site running. ...
Read Full Article • 2 comments

Tuesday October 12, 2021 6:19 am PDT by Mitchel Broussard
Today we're tracking a new Amazon low price on the 2021 32GB Apple TV 4K, available for $159.99, down from $179.00. This $19 discount is a match of the same all-time low price we saw last week, and it's the first time we've seen the deal on Amazon. Note: MacRumors is an affiliate partner with Amazon. When you click a link and make a purchase, we may receive a small payment, which helps us keep ...
Read Full Article • 10 comments