Nanoleaf, known for its range of smart lighting panels, today announced the launch of the Elements Wood Look Hexagons. The Nanoleaf Elements are a new lighting product designed to offer a more natural lighting experience in the home with modular wood-styled panels that glow with shades of white light.


Nanoleaf's standard lighting panels, which are available in Hexagon and Triangle shapes, are made from a white plastic material and are designed to change colors, with users able to select from millions of color options. The Elements Wood Look Hexagons have a wood grain-like texture, which may appeal to those who do not like the plastic look of the standard panels when they're not activated. 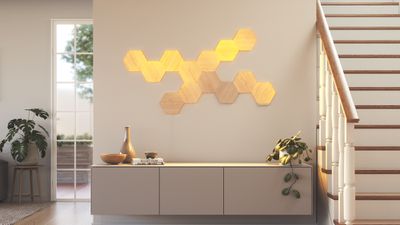 When turned off, the Nanoleaf Elements look like decorative wood panels on the wall, and when on, various shades of yellow and white light can be used to add ambient lighting to a room. The Nanoleaf Elements do not get as bright as standard Nanoleaf Hexagons and can be set to temperatures ranging from 1500K to 4000K. Nanoleaf has designed the panels to glow from the back for a double-lit effect that enhances the lighting effects.

The neutral wood-like color is meant to better fit into home decor than the standard panels. The Nanoleaf Elements are unique because there are LEDs in in the corners of each panel that can be controlled separately, a feature that Nanoleaf says adds organic motions able to better resemble embers in a fireplace, fireflies, clouds, and more.

When creating a scene in the updated Nanoleaf app, you can paint each Hexagon corner with light in different temperatures for a unique look that's not possible with other Nanoleaf panels. Nanoleaf has created 11 preset lighting scenes for the Nanoleaf Elements, and if you use scenes created for standard panels, they'll be converted into shades of white lighting using Nanoleaf-designed mapping technology.

In addition to a offering a unique wood-style finish and lighting features, the Nanoleaf Elements include all of the classic Nanoleaf functions like Rhythm Music Sync, Schedule options, Touch capabilities that turn the color of the panels when you tap them, and Circadian Lightning that changes over the course of the day. Panels are controlled through the Nanoleaf app and are also HomeKit-compatible, so Siri integration is available.

jmgregory1
I used to be part of a company that produced paper thin (0.010” / 0.25mm thick real wood veneer that was so thin, it could be applied over touch sensitive screens / sensors and they would work normally. And of course they were semi-translucent, so you could backlight the wood to create a glow much like what these printed wood grain plastic panels have.

The image I use on here for my account was the cherry wood applied to my 15” rMBP where the Apple logo lit up and glowed through the wood. The product is still being made and could easily be applied to LED panels to create glowing real wood pieces, which would be that much nicer - and every panel would be distinctly different as the wood grain varies piece by piece.
Score: 9 Votes (Like | Disagree)

I've never understood why Macrumors is all-in on Nanoleaf. Overpriced, underwhelming Chinese plastic LED panels (with horrible software) with fake wood on them seems neither an innovation or anything related to Apple or Mac.

You can always skip to a next article
Score: 8 Votes (Like | Disagree)

cjboffoli97
I've never understood why Macrumors is all-in on Nanoleaf. Overpriced, underwhelming Chinese plastic LED panels (with horrible software) with fake wood on them seems neither an innovation or anything related to Apple or Mac.
Score: 8 Votes (Like | Disagree)

While I don't own anything from Nanoleaf, it is only because I went in on Hue. I wish I could turn back the clock and go to Nanoleaf instead, but they were a niche company with only one product at the time.

Hubless, Thread-Based HomeKit multi-color lights that cost half of what Hue bulbs do? Yes please. I would be enjoying colored scenes in my house if it weren't for Hue's exorbitant prices keeping me to the Ambiance bulbs.

I went all into LIFX before realizing these lights are absolutely crap in terms of connectivity and what is essentially the entire reason they exist. Everyone on the subreddit will defend it by saying that anyone having a problem just has a crappy router but ever after buying a $400 router, all the connectivity issues persisted with no communication from the company or updates.

Nanoleaf on the other hand are been an absolute delight. Yes the light colors aren't as nice as Hue or LIFX, but I'll take that over ****** connections and over half savings. The essential line worth all the money. Their support is actually helpful and they are snappy with updates and support.
Score: 5 Votes (Like | Disagree)

I've never understood why Macrumors is all-in on Nanoleaf. Overpriced, underwhelming Chinese plastic LED panels (with horrible software) with fake wood on them seems neither an innovation or anything related to Apple or Mac.

They're a Canadian-based company...

Love Nanoleaf's light strips and bulbs which run on thread and work flawlessly with my HP Mini.
Score: 3 Votes (Like | Disagree)

nutmac
These look pretty neat, although I would prefer more traditional and timeless rectangular wooden plank design, or even square "canvas" design they offer for non-Elements series.

The biggest news by far is that Nanoleaf Elements and existing Nanoleaf Shapes products will receive a software that will turn them into Thread border routers.

Which brings me to Nanoleaf Essentials, Thread-based light bulbs and light strips. They are always out of stock and I hope to see them restocked soon.
Score: 3 Votes (Like | Disagree)
Read All Comments