If you've installed the public beta of iOS 15, iPadOS 15, or macOS Monterey on any of your devices, you may have already tried out some of the new features Apple has added to the Notes app, such as the ability to use @ user mentions in shared notes and the long-desired support for tags. 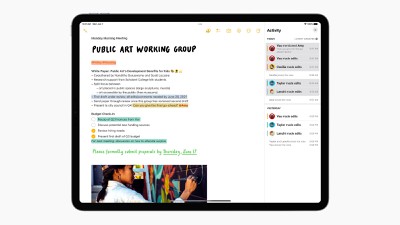 However, some users have discovered that notes containing instances of these two new features don't show up in some earlier versions of iOS and macOS, so it's best just to stay away from them if you have any other devices still running older versions of Apple's desktop or mobile operating systems.

As reported by 9to5Mac, if the Notes app identifies a device in your iCloud account running a version earlier than iOS 14.5 or macOS 11.3, it will alert you to the fact that tagged notes or notes containing mentions will be hidden on those devices.

On the plus side, if your other devices are fully up-to-date and running iOS 14.5 or macOS Big Sur 11.3 or later, then it appears that any notes using @ mentions or tags are able to be opened by those versions.

As always with beta software, it's inadvisable to install these version on devices that you rely on for work or anything else important, especially if you're using multiple devices on the same Apple account, this example being a case in point.

You do realize Apple very significantly improved notes functionality, and added tons of rich text formatting. Theres no way it would work on older versions.

I highly doubt 2014 MacBooks would not be able to handle a feature such as tags or mentions.
Score: 10 Votes (Like | Disagree)

ian87w
Oh that sucks. The problem is many probably still have macs that are way older than their iDevices. So their iDevices might be up to date, but the macs may not. And Big Sur dropped support of many macs. :(
Score: 10 Votes (Like | Disagree)

velocityg4
Too bad the Notes app is Apple only. I use Onenote instead. As I need something which works cross platform. Without resorting to a web app.

You do realize Apple very significantly improved notes functionality, and added tons of rich text formatting. Theres no way it would work on older versions.

I think the issue is. Something like this is tied to the OS version. Rather than making Notes and other apps independent updates from the OS.
Score: 8 Votes (Like | Disagree)

jive turkey
I wish Apple would decide if they want Notes to be a full-fledged note taking app or not. They keep adding features that can be beneficial, but on the other hand we still can't do simple things like drag and drop to order bullet points. At times it seems they want to be OneNote, and at other times they want to be a scratchpad.
Score: 6 Votes (Like | Disagree)

Venderious
Planned obsolescence again. Forcing me to upgrade to a new MacBook, to continue using simple features in conjuction with my iPhone.
Score: 5 Votes (Like | Disagree)

pauloregan
Of course this is the case. Why would old software show all new beta features. Ridiculous attempt at outrage.
Score: 5 Votes (Like | Disagree)
Read All Comments

Monday July 26, 2021 10:20 am PDT by Juli Clover
Apple today released macOS Big Sur 11.5.1, a minor bug fix update that comes close to one week after the launch of macOS Big Sur 11.5. The new ‌‌‌‌‌‌macOS Big Sur‌‌‌‌‌ 11.5 update can be downloaded for free on all eligible Macs using the Software Update section of System Preferences. According to Apple, macOS Big Sur 11.5.1 brings important security updates and is...
Read Full Article • 61 comments

Friday June 18, 2021 11:36 am PDT by Juli Clover
With iOS 15 and macOS Monterey, Apple is adding several quality of life improvements, which are designed to address some of the complaints that people have had with these operating systems for years now. Subscribe to the MacRumors YouTube channel for more videos. In our latest YouTube video, we're highlighting some of our favorite "fix" features that address long-running problems in iOS and...
Read Full Article • 141 comments

Tuesday July 27, 2021 10:09 am PDT by Juli Clover
Apple today seeded the fourth developer beta of macOS Monterey, the newest version of the macOS operating system. The fourth beta comes two weeks after Apple released the third macOS Monterey beta. Registered developers can download the beta through the Apple Developer Center and once the appropriate profile is installed, betas will be available through the Software Update mechanism in...
Read Full Article • 95 comments