Apple could offer its ProMotion display technology, which allows for a higher 120Hz refresh rate, across all models of the 2022 iPhone lineup after it's expected to debut the technology in the ‌iPhone‌ for the first time later this year. 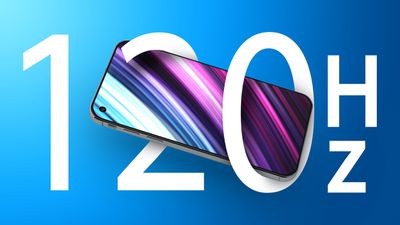 With that new lineup, a new report from The Elec offers some color as to the state of Apple's display suppliers next year. The report says that LG, which currently only produces LTPS displays for Apple's low-end iPhones, will convert its production lines to supply Apple with displays capable of a 120Hz refresh rate.

If true, both of Apple’s main display suppliers, Samsung and LG, will be able to provide LTPO OLED displays, which may give Apple the option to include ProMotion technology across its entire ‌‌iPhone‌‌ 14 lineup.

While purely speculative, there are reasons to believe Apple may indeed go down this route. Currently, besides different screen sizes and finishes, the high-end and low-end iPhones share the same fundamental ‌iPhone‌ design. All models consist of the same notch-based design that first appeared in the ‌iPhone‌ X, making the only real differences between battery capacities and varying camera capabilities.

Next year, Apple could be planning its most significant design change to the ‌iPhone‌ in years, potentially abandoning the notch in favor of a "punch-hole" design for some models. According to Apple analyst Ming-Chi Kuo, some models of the 2022 ‌iPhone‌ series won't feature a notch but instead a "punch-hole display design" that's similar to some of Samsung's high-end Galaxy smartphones.

Kuo says the new design will debut in the high-end models at a minimum, possibly meaning the lower-end devices will retain the same notch-based design. In the ‌iPhone 13‌ lineup, Apple will likely market the ProMotion display technology as the reason the higher-end ‌iPhone 13 Pro‌ and ‌iPhone 13 Pro‌ Max deserve their "Pro" nomenclature.

If the iPhone 14 Pro and ‌iPhone 14 Pro‌ Max feature a "punch-hole" screen design, the high-end models of the lineup will be further differentiated from the non-Pro devices. That differentiation may provide Apple with leeway to expand the 120Hz refresh rate to all models without potentially devaluing the prestige its "Pro" devices hold.

mrat93
give me an iPhone 14 mini or give me DEATH

beppedessi
iPhone 27 will make coffee if you manage to make siri works
Score: 15 Votes (Like | Disagree)

give me an iPhone 14 mini or give me DEATH

Better get your affairs in order
Score: 15 Votes (Like | Disagree)

jmgregory1
I find it interesting how specs like the 120Hz refresh rate screens is a huge issue when someone puts it out there that they’re coming, yet living with the iPhone 12’s generates zero complaints from everyday consumers (myself included). I’ve had and have been using an iPad Pro 12.9” since 2019, so I know what it’s like to have a variable refresh rate screen, but with my iPhone (12 Pro Max), what I care about most is (1) battery life and (2) connectivity / call quality. Because my iPhone is my primary work phone, I don’t need a screen refreshing at a high rate, as there is no benefit for my use case. I‘m sure that changes if your phone is your only or main device for video content consumption where it might be noticeable, but even then, isn’t battery life more important than screen refresh?
Score: 14 Votes (Like | Disagree)

armandxp
I've just never really cared about this. Have it on my iPad Pro. Don't have it on my iPhone 13 pro max, and I don't even notice a difference. Scrolling is just fine to me on the iPhone. Nice feature for some I guess, and a welcome addition, but I could care less. Give me Touch ID on the screen or the power button. Smaller notch or no notch. Not complaining, my 12PM is perfect to me. LOL
Score: 10 Votes (Like | Disagree)

JonGarrett
There's no such thing as a pro motion display. It's just a 120hz display pro motion is just a marketing term.

These displays will be designed by and built by Samsung
Score: 9 Votes (Like | Disagree)
Read All Comments

Friday September 17, 2021 8:57 am PDT by Joe Rossignol
Apple is planning to use an LTPS OLED display for at least one of the four models planned for the iPhone 14 series next year, according to Korean website The Elec, meaning that at least one iPhone 14 model would still have a 60Hz display. The report lines up with information previously shared by display industry consultant Ross Young, who accurately claimed that the new iPad mini would...
Read Full Article • 128 comments

Friday May 20, 2022 6:50 am PDT by Joe Rossignol
Earlier this week, The Information's Wayne Ma outlined struggles that Apple has faced during the development of its long-rumored AR/VR headset. Now, in a follow-up report, he has shared several additional details about the wearable device. Apple headset render created by Ian Zelbo based on The Information reporting For starters, one of the headset's marquee features is said to be lifelike...
Read Full Article • 149 comments