In May, a major Australian retailer took AirTags off its shelves in response to concerns that the Bluetooth-enabled item tracking device could pose a threat to children due to the size and "easy" access to its battery. Now, the Australian Competition and Consumer Commission is officially slapping Apple's AirTag with a warning. 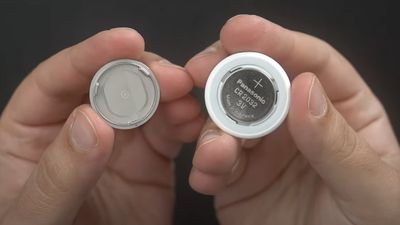 In a press release, the ACCC says it is "urging parents" to keep Apple's ‌AirTags‌ out of reach from children over "safety concerns" about the "accessibility and security of the button battery inside the product." AirTag features a replaceable coin-cell battery that can be swapped out by pressing down and twisting the backplate. The ACCC has concluded that the "press and twist" mechanism is too easy, possibly allowing children to open the backplate themselves and swallow the lithium coin-cell battery.

The ACCC is also ringing alarm bells over the outer packaging's lack of a warning about the risk that AirTag could pose to children.

"The ACCC is concerned that the AirTag's battery compartment could be accessible to young children, and the button battery removed with ease. In addition, the AirTag battery compartment's lid does not always secure fully on closing, and a distinctive sound plays when an AirTag's lid is being closed, suggesting the lid is secure when it may not be.

"We were also concerned that the outer product packaging does not have any warning about the presence and dangers of button batteries, and we note that Apple has now added a warning label to the AirTag's packaging. However, this alone does not address our fundamental concerns about children being able to access the button batteries in these devices," ACCC Deputy Chair Delia Rickard said.

Apple has in previous statements defended the design of ‌AirTags‌ and says it is fully in compliance with international and local regulation. In the statement, Apple also said it plans to directly address concerns over the lack of a warning on the AirTag's box; however, specifics on when that new and updated packaging will begin shipping remains unknown.

AirTag is designed to meet international child safety standards, including those in Australia, by requiring a two step push-and-turn mechanism to access the user-replaceable battery. We are following the regulations closely and are working to ensure that our products will meet or exceed new standards, including those for package labeling, well ahead of the timeline required

Australia's Competition and Consumer Commission has been increasingly more vigilant of Apple of late, launching several investigations into the Cupertino tech-giant, and weighing-in on topics such as users having more freedom of control over pre-installed iOS apps.

How are you meant to keep them away from children when their purpose is to find an attached item which you've lost?

I suppose parents of young children shouldn't buy them then.

orbital~debris
Before this thread is filled with posts by the misinformed or ignorant, (like the earlier one ('https://forums.macrumors.com/threads/airtag-removable-battery-sparks-child-safety-concerns.2294746/')), please use a moment of your time to:

cmcbhi
There are many things in the world that ar dangerous for kids.
Thats what parents are for. To protect them.
Score: 14 Votes (Like | Disagree)

This reply nails it doesn’t it? I have two kids and when they were really little, you could call them “dumb” because they don’t know any better. You have to try and make the environment as safe as possible for them whilst also educating Them about what’s dangerous.

These small batteries are a danger to kids, but so are many many other things. Just need some perspective on it.
Score: 13 Votes (Like | Disagree)

mazz0
I think on the whole I’m with the ACCC on this one. It’s not that it’s easy to accidentally open the AirTags (though it’s a lot easier than, for example, medicine bottles), but it is hard to tell when they’re closed properly - I think it’s likely there’ll be many cases of people not closing them properly.

It needs a proper click/snap when it’s opening and closing.

I predict a silent update.
Score: 12 Votes (Like | Disagree)

GubbyMan
I'd say we give kids small batteries until natural selection takes it course and solves this problem. /s
Score: 12 Votes (Like | Disagree)
Read All Comments