Apple enjoyed a "significant increase" in shipments in India in the first quarter of 2021, according to Canalys, suggesting the opening of its online store in the country late last year has been reaping rewards for the company (via DigiTimes). 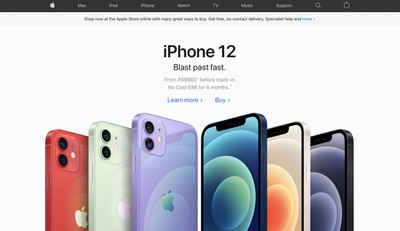 Driven largely by traffic to the store that led to subsequent purchases, Apple became the fifth largest computer brand in India in Q1, with shipments of desktops, notebooks, tablets, and workstations combined reaching 208,000 units.

Research firm IDC's figures also indicate Apple's computer shipments in India (excluding tablets) grew 335.5% year-on-year in the first quarter and only lagged behind Asustek's by around 2,000 units. Apple and Asustek were tied for fifth place in IDC's rankings for computer brands in India in the quarter.

In a January earnings call, Apple CEO Tim Cook said that its India online store had received a "tremendous" response since opening, and that it had doubled Apple's smartphone share in the country to 4% in the December quarter. Cook said that as a result of the success, Apple was bringing forward plans to launch brick-and-mortar retail stores in the country.

himanshumodi
I really hope their service and support is as good as it is in the rest of the world. With the base product, apple care+ and apple exchange rate, the products are obscenely expensive for India market. But if the support to go with it is good, a lot of the rich, upper middleclass folks will end up buying because of sheer longevity of Apple products (and the status associated with the brand).
Score: 4 Votes (Like | Disagree)

One2Grift
Apple bringing its share to 10% in India would be a shock and certainly an incredible success point. Apple has decent sized shares in many industrialized countries but these markets are quite penetrated. Apple is virtually nada elsewhere. As such iPhone cominggrowth projections are quite small at around 3%.
India is a huge market. It alone would propel that 3% upwards to 4 or 5%.
we’ll see if it’s reality but iPhone a couple of points on iPhone revenue is huge.
Score: 3 Votes (Like | Disagree)

Ramchi
Apple carefully playing India. Their products are sold more in the off market sources, second hand, scalpers from ME, Singapore,China,Hong Kong routs. I was able to get iPhone Xs Max 512 GB for excellent price ($800-$900) about 18 months back and could sell it after 10 months almost for the same price (under warranty).

If their mid ranger editions could match the prices of OPO Flagship version, then there will be huge shift in user base to iPhones(which Apple may not do) . Hence their growth in terms of market share will be very very slow but in terms of growth percentage it will be very impressive

.iPhone 11 price was the perfect one.

What would “really serious” look like? Remember, Apple does not chase market share (though they are curiously eager to brag about it when they have the edge) and will always protect their industry leading profit margins. So within those parameters what should Apple be doing to make gains in India? As a shareholder who is frustrated by the recently stagnant stock price I really want to know.

There are at a minimum 100 million Indians who can easily afford Apple devices (Still very low estimate). They need to see the value what Apple brings.
Score: 2 Votes (Like | Disagree)

I must admit I don't know much about this. However, I do know many of the models sold in India are not even available in the US. Do they manufacture their flagship phones there?

Yes they do.
Score: 1 Votes (Like | Disagree)
Read All Comments

Tuesday July 27, 2021 2:45 pm PDT by Juli Clover
Apple experienced "strong double digit growth" in the number of iPhone users who were upgrading an older device or swapping to an iPhone from an Android device, Apple CEO Tim Cook said during today's earnings call covering the third fiscal quarter of 2021. Cook said that it was the largest upgrade quarter for Q3 ever, and that the iPhone 12 upgrade cycle on the whole was "very strong."...
Read Full Article • 75 comments

Monday July 19, 2021 10:33 am PDT by Juli Clover
Apple Music Spatial Audio with Dolby Atmos and Apple Music Lossless are now rolling out to Apple Music subscribers in India, based on reports circulating on Twitter. The new Apple Music features began rolling out to customers in other countries at the beginning of June, but Apple delayed the launch in India. Since June, the Apple Music website in India has had a "coming soon" label, and it...
Read Full Article • 7 comments

Tuesday March 9, 2021 4:40 am PST by Tim Hardwick
Apple will soon start flagship iPhone 12 production on Indian soil for local customers, the company said on Tuesday (via Punjab News Express). "We are proud to be starting production of iPhone 12 in India for our local customers," Apple told the Indo-Asian News Service in a statement. "Apple is dedicated to making the best products and services in the world to delight our customers," the...
Read Full Article • 18 comments

Tuesday July 27, 2021 1:52 pm PDT by Juli Clover
Macs and iPads are selling in record numbers as people continue to work and learn from home. According to Apple's latest earnings report for the third fiscal quarter of 2021 (second calendar quarter), Apple's Mac category brought in $8.8 billion, up from $6.5 billion in the year-ago quarter. Sales were just a bit down from the second fiscal quarter of 2021, when Apple's Macs brought in $9.1 ...
Read Full Article • 15 comments

Thursday July 15, 2021 12:51 pm PDT by Juli Clover
Apple was the number three worldwide smartphone vendor in the second quarter of 2021, according to smartphone shipment estimates shared today by Canalys. Apple's iPhone sales were surpassed by smartphone sales from Samsung and Chinese smartphone maker Xiaomi, with Xiaomi surpassing Apple and taking the number two spot for the first time. Samsung was the most popular smartphone vendor with ...
Read Full Article • 200 comments