Microsoft today held an event where it unveiled Windows 11, the next generation of Windows with a new design, new versatility capabilities, gaming improvements, and more. One notable announcement was that, starting with Windows 11, PCs will be able to run Android apps. 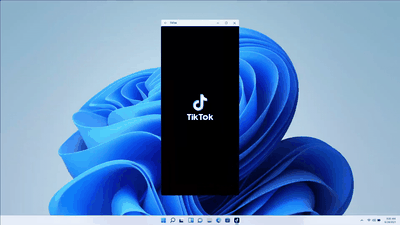 Logically, Microsoft would partner with the Google Play Store to offer Android apps on its platforms. However, the company is taking a different route, partnering with Amazon to open Windows 11 to Android apps. As reported by The Verge, users will search for an Android app offered through the Amazon app marketplace directly within the newly redesigned Microsoft App Store.

Android apps will run on the platform using Intel's "bridge technology." Like traditional Windows apps, Android apps can be added to the new centered Windows taskbar, pinned, and snapped to different multitasking modes. Specific details remain unknown, such as hardware requirements and developers' need to make their Android apps runnable on Windows 11.

Despite Apple's best intentions, the experience of running iOS apps on Apple silicon Macs has been rough due to Mac's input being fully trackpad and keyboard-based, compared to the direct touch experience the apps were initially designed for. Apple has attempted to solve the issue by introducing touch alternatives, which turn the Mac trackpad into a "virtual touch screen."

DHagan4755
Hopefully it will run more smoothly than the live stream announcing it!
Score: 32 Votes (Like | Disagree)

jwilson25
Microsoft: "Windows 10 is the last version of Windows"

Logically, Microsoft would partner with the Google Play Store to offer Android apps on its platforms. However, the company is taking a different route, partnering with Amazon to open Windows 11 to Android apps.

Stromos
Guess I'm the only one to actually watch the keynote. It was a direct attack on Apple and anyone on this site should watch it because you will catch the jabs pretty easily.

Microsoft store will charge ZERO commissions if a developer wants to bring their own commerce back-end to sell their apps on the Windows Store.

Kylo83
Windows 11 and android 12 both look better than apples software times are changing
Score: 22 Votes (Like | Disagree)
Read All Comments

Thursday July 1, 2021 5:56 am PDT by Sami Fathi
The popular software for virtualizing Windows on macOS, Parallels Desktop, has confirmed that support for the newly announced Windows 11 is in the works for Mac computers. Last week, Microsoft unveiled Windows 11, the next major version of the Windows operating system. Obviously, Windows 11 won't be supported on Mac computers, but as is normal, some Mac users run virtualized desktops on...
Read Full Article • 234 comments

Friday June 11, 2021 7:36 am PDT by Joe Rossignol
Apple this week released Boot Camp version 6.1.15 for users running Windows on a Mac, as noted in a Reddit post spotted by The Verge. The update adds support for more precise trackpad gestures on MacBooks running Windows, including a single tap to click, tapping the lower-right corner to right-click, swiping down to scroll up, and various multi-touch gestures using three or four fingers....
Read Full Article • 62 comments

Wednesday June 9, 2021 7:13 am PDT by Joe Rossignol
Apple announced macOS Monterey this week, and one small but convenient feature that went unmentioned during the WWDC keynote is automatic window resizing. As explained on the macOS Monterey features page, windows now automatically resize when they are moved from a Mac's built-in display to a secondary display, including an external monitor, another Mac, or an iPad using Sidecar. This...
Read Full Article • 42 comments

Tuesday June 8, 2021 11:53 am PDT by Juli Clover
To help new iPhone owners transition from an Android device, Apple uses the "Move to iOS" Android app for transferring content like contacts, message history, photos and videos, web bookmarks, mail account information, calendars, DRM-free songs, wallpapers, and more. This app has been around since 2015, but with the release of iOS 15, Apple is improving the Move to iOS experience. With...
Read Full Article • 73 comments

Thursday April 22, 2021 1:21 am PDT by Tim Hardwick
Microsoft Teams for macOS has been updated so that other people on a video call are able to hear a Mac's system audio when another user is screen sharing. Teams for Windows has always offered users the option of system audio sharing. Today's update brings parity to the Mac app by including the optional feature, which is likely to be welcomed by teachers and businesses. Microsoft also says ...
Read Full Article • 72 comments