Apple today lowered the prices of AppleCare+ plans for MacBook Air and 13-inch MacBook Pro models equipped with the M1 chip. Coverage offered by the plans, as well as accidental damage fees, appear to remain unchanged. 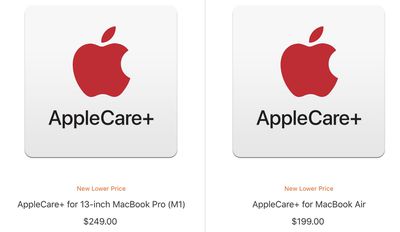 In the United States, AppleCare+ for the MacBook Air now costs $199, down from $249. The new price applies to both M1 and Intel-based MacBook Air models, although Apple no longer sells the Intel-based model directly.

The new lower prices are also available in other countries we've checked, such as Canada, with discounts varying based on the local currency.

Customers who recently purchased AppleCare+ for one of the affected MacBook models can contact Apple Support for assistance with cancelling their current AppleCare+ plan and purchasing a new one at the lower price, according to information obtained by MacRumors, but Apple did not provide a cutoff date for eligibility.

AppleCare+ for Mac provides up to two incidents of accidental damage protection every 12 months, each subject to a service fee of $99 for screen damage or external enclosure damage, or $299 for other damage. AppleCare+ also provides 24/7 priority access to Apple's technical support representatives by online chat or phone.

Update: The lower AppleCare+ prices for the 13-inch MacBook Air and MacBook Pro powered with the M1 chip are now available in the United Kingdom.

WestonHarvey1
Must be dividends from not having to constantly replace keyboards.
Score: 54 Votes (Like | Disagree)

Alex3917
Given that the Intel chips are no longer cooking the logic boards of every computer every two years, I guess it makes sense.
Score: 26 Votes (Like | Disagree)

Seems like many Apple are not buying the Apple care with new macs.

yeah Apple ain't doing this out the goodness of their heart. if they could get away with keeping the higher price they would.
Score: 17 Votes (Like | Disagree)

TheYayAreaLiving
Seems like many Apple fans are not buying the Apple care with new macs.
Score: 14 Votes (Like | Disagree)

Mr. Dee
Never have, never will. Except for the normal wear and tear, Apple devices I have are just as good as when I bought them.
Score: 11 Votes (Like | Disagree)

Bro are you typing on a MacBook Pro by any chance
Score: 10 Votes (Like | Disagree)
Read All Comments

Wednesday September 15, 2021 4:48 am PDT by Sami Fathi
Apple has expanded AppleCare+ with Theft and Loss coverage, which includes up to two incidents of theft or loss of an iPhone, to the United Kingdom and Australia. Offered as an additional plan to customers in the United States, Japan, Germany, and now also the United Kingdom and Australia, AppleCare+ with Theft and Loss coverage can help customers who unfortunately have had their devices...
Read Full Article • 62 comments

Tuesday August 24, 2021 5:28 am PDT by Hartley Charlton
The upcoming 14-inch MacBook Pro is set to be more expensive than the current 13-inch MacBook Pro and both the 14 and 16-inch models will offer the same performance, according to the leaker known as "Dylandkt." The leaker shared the information on Twitter, explaining that both of the upcoming MacBook Pro models, expected to come in 14 and 16-inch sizes, will feature the same performance due...
Read Full Article • 400 comments

Monday September 13, 2021 6:36 am PDT by Mitchel Broussard
Amazon today is offering the 512GB M1 MacBook Air for $1,099.99, down from $1,249.00. This is a match of the all-time low price on this model of the 2020 MacBook Air, and it's available in Gold and Silver. Note: MacRumors is an affiliate partner with some of these vendors. When you click a link and make a purchase, we may receive a small payment, which helps us keep the site running. You'll ...
Read Full Article • 17 comments

AppleCare+ Coverage for Mac Can Now Be Extended Beyond Three Years

Wednesday April 21, 2021 9:41 am PDT by Joe Rossignol
In addition to making AppleCare+ available for the Apple TV for the first time, Apple is now allowing AppleCare+ coverage for Macs to be extended indefinitely in the United States, according to an updated support document. After paying upfront for an AppleCare+ plan for a Mac, the initial coverage period remains three years, but customers now have the option to purchase additional coverage...
Read Full Article • 92 comments

Deals: Take Up to $199 Off Apple's M1 MacBook Pro and MacBook Air at Best Buy and Amazon

Wednesday August 4, 2021 10:41 am PDT by Mitchel Broussard
Best Buy and Amazon are both offering great deals on numerous models of the MacBook Pro and MacBook Air today, including a handful of record low deals on the latest Apple notebooks. Note: MacRumors is an affiliate partner with some of these vendors. When you click a link and make a purchase, we may receive a small payment, which helps us keep the site running. 13-Inch M1 MacBook Air...
Read Full Article • 28 comments