In 2016, Apple considered an "audacious" plan to launch its own healthcare service, based on a subscription, with "Apple doctors" at clinics for customers, according to The Wall Street Journal. 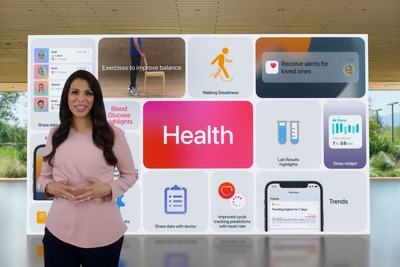 One of its most ambitious healthcare ideas was a plan to offer primary-care medicine, conceived in 2016, according to documents and the people familiar with the plan. An Apple team spent months trying to figure out how the flood of health and wellness data collected from users of its smartwatch, first released in 2015, might be used to improve healthcare, the people said.

Apple CEO Tim Cook has said one of Apple's greatest contributions to humanity will be in health, and at one point, its biggest idea of that contribution would be its own healthcare service.

One of its most ambitious healthcare ideas was a plan to offer primary-care medicine, conceived in 2016, according to documents and the people familiar with the plan. An Apple team spent months trying to figure out how the flood of health and wellness data collected from users of its smartwatch, first released in 2015, might be used to improve healthcare, the people said.

The team decided one of the best ways to realize that vision was to provide a medical service of its own, said people familiar with the plan, linking data generated by Apple devices with virtual and in-person care provided by Apple doctors. Apple would offer primary care, but also continuous health monitoring as part of a subscription-based personalized health program, according to these people and the documents.

In 2017, a year after the idea was first conceived, Apple took over health clinics near Apple Park to set up testbeds for the new health service. Dr Sumbul Desai, of Stanford University, manages the project. The testing at those clinics continues to this day, however, they have yet to move past "a preliminary stage."

Dr Desai's project and team have faced pushback from Apple employees. Some employees, including midlevel managers, have been critical of the way Dr Desai's unit "discourages critical feedback," including allegations that the unit provided inaccurate data about the performance of the test clinics, according to The Wall Street Journal.

Employees concerned about the culture pointed to a 2019 meeting during which a midlevel manager raised questions about data, according to people familiar with the meeting and the documents. Dr. Desai responded angrily, leading some present to conclude that critical questions were unwelcome, according to the people and the documents. The manager left Apple weeks later, and the episode contributed to her departure, documents show.

One initiative driven by Dr. Desai's team was an app being tested among Apple employees called HealthHabit. According to the report, it was meant to "connect people with clinicians via chat and encourages them to set health challenges." The app struggled with low downloads and enrollment, with half of the users who had downloaded the app in May not enrolling. The app's struggle has caused concerns over the accuracy of the data being collected.

Data supporting the app's hypertension program has caused new concerns among employees about the integrity of internal data and analysis, some of the people said.

During a presentation for all Apple health employees in March, Mr. Williams praised the clinics' results in treating hypertension and pointed to them as evidence supporting the HealthHabit app's potential, according to people who saw the presentation. He suggested that the company may have wider ambitions for the app if it is successful, they said.

At the same meeting, Apple's COO, Jeff Williams, also reportedly presented data that showed that "91% of patients in Apple's clinics with more severe stage-two hypertension improved to healthier stages or normal." An Apple spokesperson responded, saying that the statistic cited by Williams was for an internal program and not a product.

Apple's idea of launching its own healthcare service has stalled internally, and the company is likely keen on first building up its health infrastructure through more robust and meaningful health features for the Apple Watch, ‌iPhone‌, and various health studies. For example, Apple is reportedly considering and studying ways to include a blood-sugar sensor and temperature sensor in future iterations of the Apple Watch.

boss.king
I don’t know if I want a Health Genius giving me a check up.
Score: 12 Votes (Like | Disagree)

binarybob
Wow- the old saying, 'An apple a day keeps the machines at bay'
Score: 9 Votes (Like | Disagree)

ChromeAce
As soon as I upgraded to bodyOS 4, my life expectancy meter went down.
Score: 9 Votes (Like | Disagree)

Shanghaichica
I object to this. They shouldn’t be putting their fingers into every pie. It feels a bit intrusive.
Score: 8 Votes (Like | Disagree)

InuNacho
Sounds somewhat similar to the anatomy lessons of the Victorian era where it was discovered that those stricken by poverty had different wear and tear on the body than that of a healthy individual.

Living in one of the less "rich" sides of Silicon Valley, there is definitely a real divide between who can afford an expensive luxury phone + luxury watch and who can't. My neighbor is a hardcore techie with all the latest greatest Apple products and appears to be relatively healthy in appearance, by contrast my landlady on the other hand whom I rent my in-law unit from is less healthy, is of a lower income bracket and occasionally asks me for help with her older Android phone. No chance of biometrics or a watch there.

If this health care plan comes to reality, either it'll be targeted towards the high income brackets with overall healthy tech savvy individuals or it'll stay trapped in the Valley mocked by those without it.
Score: 6 Votes (Like | Disagree)
Read All Comments

Tuesday June 15, 2021 12:45 pm PDT by Juli Clover
The Mayo Clinic today debuted support for the Apple Health records feature available on the iPhone, allowing Mayo Clinic patients to add their medical records to the Health app. Health Records is a feature that's designed to allow patients to view and aggregate all of their health data in one easy-to-access spot on the iPhone. More than 700 institutions and 12,000 care locations now offer...
Read Full Article • 30 comments

Wednesday June 16, 2021 6:39 am PDT by Sami Fathi
In a wide-ranging interview about Apple's work and progress in the field of health, the company's vice president of technology, Kevin Lynch, has hinted that Apple may someday use sensor fusion with AirPods to provide more health data to customers. Currently, the iPhone and Apple Watch both utilize a wide array of sensors to provide users with health data and information independently. In...
Read Full Article • 31 comments

Apple Requiring Retail Employees in Some Regions to Wear Masks, Other Employees Encouraged to Do So

Tuesday July 20, 2021 11:08 am PDT by Juli Clover
Amid spiking cases in the ongoing health crisis, Apple has started urging its employees to wear masks in retail store locations once again, and is mandating it in some areas, according to Bloomberg's Mark Gurman. Apple stopped requiring fully vaccinated customers and employees to wear masks at Apple Store locations in June, but with the Delta variant spreading across the United States and...
Read Full Article • 89 comments

Monday July 19, 2021 11:09 am PDT by Juli Clover
Apple has made it clear that most of its employees will not be able to work remotely on a permanent basis, but that isn't stopping some corporate staff from continuing to push for more relaxed remote working rules, reports Recode. In a new petition that went out this week, employees are asking Apple to allow employees to work from home on a more permanent basis. Apple has agreed to a hybrid...
Read Full Article • 509 comments

Monday July 19, 2021 9:09 pm PDT by Eric Slivka
Amid another rise in COVID-19 cases and continued concerns from employees about Apple's stated plan to start bringing many employees back into the office three days a week starting in September, Apple has delayed its plans until at least October, reports Bloomberg. The report suggests that Apple will continue to monitor the situation and will give employees at least a month's notice before...
Read Full Article • 184 comments