A shipment of more than 36,000 fake AirPods from China to Cincinnati has been seized by Customs and Border Protection after the fake earbuds were found to violate Apple's copyright infringement rules, according to a press release from the agency. 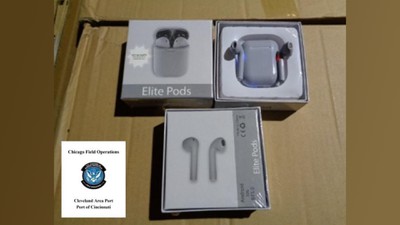 The shipment of earbuds were declared seized on May 11 and May 13 after they were found to include not only Apple's logo but also the shape and design of ‌AirPods‌. The 36,000 ‌AirPods‌, valued at $7.16 million, were split across three separate shipments.

On May 6, U.S. Customs and Border Protection (CBP) officers in Cincinnati inspected three large shipments from China and found what appeared to be tens of thousands of earbuds in violation of Apple's protected configurations. After consulting with an import specialist from CBP's Center of Excellence and Expertise, the items were found to be in violation of CBP trademark and copyright codes and were declared seized on May 11 and 13.

Apple products, especially ‌AirPods‌, are often counterfeited and sold for a cheaper retail price. Apple is aware of the issue, having an entire team dedicated to ensuring these products do not hit the mainstream market. Manufacturers even go as far as to create fake versions of unreleased AirPods using information from rumors and leaks.

69Mustang
Small correction. The seized items weren't worth $7 million. Customs said the items would have been worth $7 million if they were genuine AirPods. These weren't genuine, and would have most likely sold for a fraction of the price of genuine AirPods. What Customs seized was probably worth no more than half a million street value imo. $7 million just makes for a better headline.

Bigger correction. The items were not found to include Apple logos. The press release stated:
"Apple has configuration trademarks on their AirPods and has recorded those trademarks with the CBP. Furthermore, a company does not have to put the "Apple" wordmark or design on their products to violate these trademarks. In this instance, further inspection of the earbuds revealed that their shape and design replicated the protected Apple configuration."

Are they really fake or just cheap junk [very likely], since they're not packaged or named in any way to "dupe" any real potential AirPods buyer

Depends on your definition of "fake" - not a legal term of art AFAIK. The official charge is "in violation of CBP trademark and copyright codes". They pretty clearly say "Elite Pods" and not "AirPods" on the box, and it looks like they are grey rather than white - they're not going to fool anybody. I'd say "cheap copy" and reserve "fake" or "counterfeit" for items being passed off as the real thing.

Apple are entitled to enforce their legally-protected designs, but maybe that should be a job for the civil courts, at Apple's expense, and customs/border protection shouldn't be making judgements on those issues...?
Score: 9 Votes (Like | Disagree)

mtneer
What’s the trigger for CBP to seize a particular consignment? Does Apple request a seizure? There are hundreds of similar products ready to ship on Amazon with no seeming issues.. wonder how they manage?
Score: 8 Votes (Like | Disagree)

Are they really fake or just cheap junk [very likely], since they're not packaged or named in any way to "dupe" any real potential AirPods buyer
Score: 6 Votes (Like | Disagree)

shigzeo
Western capitalists banked on China, moving factories wholesale from America, Europe, and now Japan and Korea, to China, which allowed China's meteoric rise, both economically, but also as a copy-cat production state. Then, when those copycats come back to the border, and after already destroying the entire manufacturing base of the West, the West then demonises the detritus of its own short term money grubbing as if it has the moral high ground.

It is all so tiresome.
Score: 5 Votes (Like | Disagree)

The Clark
So I won't be receiving my elite pods!?
Score: 4 Votes (Like | Disagree)
Read All Comments

Wednesday June 16, 2021 10:49 am PDT by Juli Clover
Apple CEO Tim Cook this morning participated in a virtual interview at the VivaTech conference, which is described as Europe's biggest startup and tech event. Cook was interviewed by Guillaume Lacroix, CEO and founder of Brut, a media company that creates short-form video content. Much of the discussion centered on privacy, as it often does in interviews that Cook participates in. He...
Read Full Article • 330 comments

Friday June 18, 2021 9:41 am PDT by Sami Fathi
After a long wait, YouTube for iOS is officially gaining picture-in-picture support, allowing all users, non-premium and premium subscribers, to close the YouTube app and continue watching their video in a small pop-up window. In a statement to MacRumors, YouTube says that picture-in-picture is currently rolling out to all premium subscribers on iOS and that a larger rollout to all US iOS...
Read Full Article • 152 comments

Wednesday June 16, 2021 11:26 am PDT by Juli Clover
Update: Bloomberg inaccurately interpreted the original comments and has since drastically changed the wording of its article. The original Bloomberg piece said that Apple would be prohibited from pre-installing its own apps on iPhones. The updated Bloomberg article has been rewritten to clarify that the antitrust legislation prohibits Apple from preventing users from removing Apple-created...
Read Full Article • 517 comments

Friday June 18, 2021 6:59 am PDT by Sami Fathi
Apple supplier TSMC is preparing to produce 3nm chips in the second half of 2022, and in the coming months, the supplier will begin production of 4nm chips, according to a new report from DigiTimes. Apple had previously booked the initial capacity of TSMC's 4nm chip production for future Macs and more recently ordered TSMC to begin production of the A15 chip for the upcoming iPhone 13,...
Read Full Article • 128 comments