Update: The early unboxing video was taken down, but other unboxing and first impression videos are now available.

The new 24-inch iMac doesn't officially launch until this Friday, May 21, but an early unboxing of the machine has been shared on YouTube. 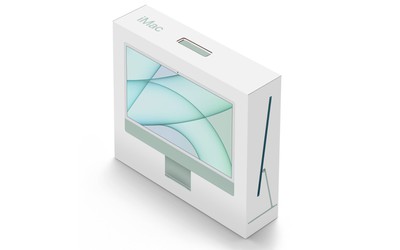 The ‌iMac‌ unboxing video was made private subsequent to this story.
The video from Gadget Guy is in Cantonese, but it offers an up-close look at the yellow version of the ‌iMac‌ including how the machine and its color-matched accessories are packed in the box, how the magnetic power cord attaches to the rear of the ‌iMac‌, and the Touch ID button on the Magic Keyboard.

Additional topics include a look at using the Globe key to change between keyboard languages, installing iOS apps on the M1-powered ‌iMac‌, the side-oriented headphone jack, some quick benchmarks using Geekbench and Cinebench that show essentially the same performance as other M1 Macs, disk speed tests approaching 3000 MB/s for both read and write, and more.

Customers who placed early ‌M1‌ ‌iMac‌ orders have seen their orders begin shipping ahead of Friday's targeted launch date, but we should be seeing press reviews hitting as soon as Tuesday morning.

Update: Video has been made private but has been mirrored here.

Update 2: The mirror has now also been made private.

AmazeSE
Here is the video.
I downloaded the private video using savefrom ('https://en.savefrom.net/20/').

yansun
The video is in Cantonese, not in (Mandarin) Chinese.
Score: 19 Votes (Like | Disagree)

countryside
I am surprised we haven't seen anything from the usual simp, iJustine...
Score: 17 Votes (Like | Disagree)

Maconplasma
I just love how people damn near begged Apple to do a redesign of the iMac but then they want it to look like the original design and hate on this one. Some people's lives aren't happy unless they bashing and trashing on Apple. I'm thankful for the video. The new iMac is beautiful.
Score: 13 Votes (Like | Disagree)
Read All Comments

Saturday May 29, 2021 9:53 am PDT by Sami Fathi
Despite leaving the company in 2019, Apple's former chief design officer, Jony Ive, helped design the new 24-inch iMac, according to an excerpt from Wired's review of the new desktop computer. Jony Ive famously left Apple in 2019 to form his own independent design company, which would have Apple as one of its clients. During his tenure at Apple, Ive oversaw the development and design of...
Read Full Article • 568 comments