While the new 24-inch iMac with the M1 chip is still over a week away from launching, a few lucky customers are beginning to see their orders marked as "shipped" on Apple's online store, with a May 21 delivery date. 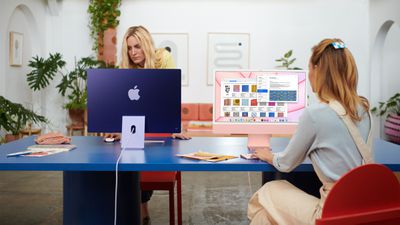 MacRumors readers Jean-François and Emmanuel, both from Canada, let us know that their orders moved to "shipped" status starting today.

For customers who still see their iMac order in the "processing" or "preparing to ship" stages, this is still normal at this time. Many of the initial orders that are now shifting to "shipped" status are likely custom built-to-order configurations from Apple's online store, with shipments coming directly from China following assembly.

Powered by Apple's M1 chip with an 8-core CPU and up to an 8-core GPU, the new iMac can be configured with up to 16GB of unified memory and up to 2TB of SSD storage. There's also a minimum of two Thunderbolt 3/USB 4 ports, with an additional two USB 3 ports on higher-end models. The new iMac is just 11.5mm thick and available in up to seven colors, including green, yellow, orange, pink, purple, blue, and silver.

The new iMac became available to order on Apple.com starting April 30, with pricing starting at $1,299 in the United States.

Lenovo would shart out

This is miles away from anything that resembles Lenovo's design language. This unmistakable Apple.
Score: 13 Votes (Like | Disagree)

This is miles away from anything that resembles Lenovo's design language. This unmistakable Apple.

Exactly. Folks need to go back and look at prior iMac designs. The M1 iMac is as signature Apple as the original CRT iMacs.
Score: 10 Votes (Like | Disagree)

filmantopia
Looking forward to the reviews.
Score: 9 Votes (Like | Disagree)

Eggtastic
Should have carried the darker color to the front. Most set ups will be faced against a wall.
Score: 8 Votes (Like | Disagree)

tomtad
Can't believe we've not had a hands on with one yet! Really miss this from the online only keynotes.
Score: 7 Votes (Like | Disagree)
Read All Comments

Wednesday March 2, 2022 6:21 am PST by Mitchel Broussard
Today on Amazon you can get four of Apple's 24-inch M1 iMacs at up to $150 off their original prices, including the 7-core GPU and 8-core GPU 256GB models. Both of these iMacs have two colors on sale, and all are in stock and sold directly from Amazon. Note: MacRumors is an affiliate partner with Amazon. When you click a link and make a purchase, we may receive a small payment, which helps us...
Read Full Article • 7 comments