An early look at an ongoing analysis of Apple's App Tracking Transparency suggests that the vast majority of iPhone users are leaving app tracking disabled since the feature went live on April 26 with the release of iOS 14.5. 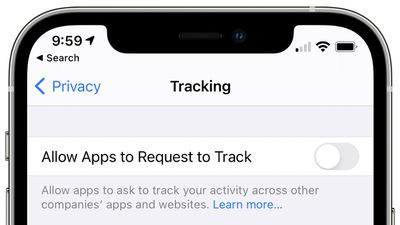 According to the latest data from analytics firm Flurry, just 4% of ‌iPhone‌ users in the U.S. have actively chosen to opt into app tracking after updating their device to iOS 14.5. The data is based on a sampling of 2.5 million daily mobile active users.

When looking at users worldwide who allow app tracking, the figure rises to 12% of users in a 5.3 million user sample size.

With the release of iOS 14.5, apps must now ask for and receive user permission before they can access a device's random advertising identifier, which is used to track user activity across apps and websites. Users can either enable or disable the ability for apps to ask to track them. Apple disables the setting by default.

Since the update almost two weeks ago, Flurry's figures show a stable rate of app-tracking opt-outs, with the worldwide figure hovering between 11-13%, and 2-5% in the U.S. The challenge for the personalized ads market will be significant if the first two weeks end up reflecting a long-term trend.

Facebook, a vociferous opponent of ATT, has already started attempting to convince users that they must enable tracking in iOS 14.5 if they want to help keep Facebook and Instagram "free of charge." That sentiment would seem to go against the social network's earlier claim that ATT will have a "manageable" impact on its business and could even benefit Facebook in the long term.

Flurry Analytics, owned by Verizon Media, is used in over 1 million mobile applications, providing aggregated insights across 2 billion mobile devices per month. Flurry intends to update its figures every weekday for the daily opt-in rate as well as the share of users that apps cannot ask to track, both in the U.S. and globally.

Artemis70
Why would anyone ever choose to turn on tracking? Open to any use cases....
Score: 47 Votes (Like | Disagree)

adrianlondon
The default is for tracking to be disabled when iOS 14.5 is installed. So in reality this is "4% of users have opted in to having apps ask whether to track or not". 96% of users have just done nothing.
Score: 38 Votes (Like | Disagree)

anubis09
If Facebook wants to play the free card I’ll gladly delete my account and request a refund on all the free data they collected.
Score: 38 Votes (Like | Disagree)

boyreinvented
Facebook doesn’t get it. We’re not loyal to them.

Why would anyone ever choose to turn on tracking? Open to any use cases....

I had it disabled out interest.
I just wanted to know which app had the audacity to ask me in the first place. Then I deleted the least important ones.
Score: 25 Votes (Like | Disagree)

hagar
If the industry took this seriously and transparently, they wouldn’t be in this mess right now. They took what was not theirs behind our backs.
Score: 25 Votes (Like | Disagree)
Read All Comments