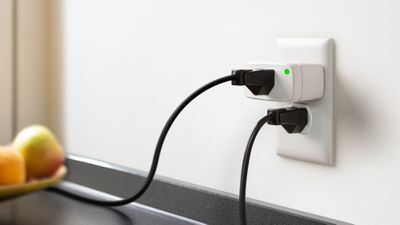 The fourth-generation Eve Energy supports HomeKit over Thread, and as a main-powered always-on Thread accessory, Eve Energy serves as a router node in the Thread network to make smart homes more reliable with better reach throughout the house.

As a Thread router node, the Eve Energy can relay other accessories' data packages in the Thread mesh network for overall performance improvements.

"Packing Thread router functionality into a premium quality, small-footprint smart plug, Eve Energy is the quintessential HomeKit accessory," said Jerome Gackel, CEO of Eve Systems. "Not only does it offer endless automation possibilities, but it also delivers an ultra-robust network to ensure that your schedules and timers work, any time and any place."

As a Smart Home device, Eve Energy is a plug that can turn any standard appliance into a smart appliance, allowing it to be controlled through the Eve app, though the Home app, and with Siri voice commands.

With the Eve app, users can monitor the energy consumption and energy costs of whatever is plugged into the Eve Energy.

If a smart home setup has a HomePod or Apple TV as a home hub, users can access their accessories when away from home, plus the Eve Energy supports automations that work with other ‌HomeKit‌ products.

Through Thread and Bluetooth integration, Eve Energy can join a Thread network automatically, and it will work more reliably than a standalone Bluetooth-enabled accessory. Eve has several other Thread-compatible accessories including the Eve Door & Window, Eve Weather, and Eve Aqua.

Eve Energy can be purchased from the Eve online store for $40, and it will soon be available from Apple and Amazon.

Still haven't found anyone that can tell me what Thread is and how it is any better or different from what we've had all along.

A network for your smart home devices. While Bluetooth and WiFi depend on a hub or router, Thread does not.

In a traditional network you could only extend said network by buying additional hubs or routers, in a Thread network a device itself can extend the network.
Score: 10 Votes (Like | Disagree)

Still haven't found anyone that can tell me what Thread is and how it is any better or different from what we've had all along.

It’s a lot like a mesh wifi network. Each node (thread enabled device) then talks to the other nodes and the more there are the better and stronger the signal, thereby boosting the rest of them at the same time.

It also runs on a different frequency than the normal wifi does, so it shouldn’t interfere or slow down your actual wifi network.

It’s also future-proof, in that a thread-enabled device should work with the CHIP protocol, which is the standard that the big home automation companies are putting together for better cross-platform compatibility
Score: 8 Votes (Like | Disagree)

They say this is a positive, because bluetooth uses less energy. I have found it to be a big negative, as it greatly limits where in the house I can place an Eve device. I'm now favoring devices from Meross, which do connect via wifi and are ~ $15 a piece.

The first time a family member tries to turn on a light and gets the "device not found" error, you'll be questioning why you went with bluetooth in the first place.

One main advantage of Bluetooth is safety. With Wifi you never know to what server it sends data, and a Wifi smart thing is theoretically a potential target for attack. Bluetooth is not connected to the web and therefore safer.

Disadvantage is the limited distance bluetooth is working, but that is exactly what thread is made to counteract by extending the range of the system.
Score: 5 Votes (Like | Disagree)

EmotionalSnow
Takes up too much space in my opinion. These should be more like normal power sockets - in the wall.
Score: 5 Votes (Like | Disagree)

Pay $39.95 for one "smart" plug so I don't have to get up and physically/manually turn on that one device?

I integrated the plug in home settings like "Switch lamp on half an hour after sunset" or "switch on radio (which is a bit hidden) when I open my newspaper app when sitting down to breakfast in the morning". It is a luxury, but is nice to have.
Score: 4 Votes (Like | Disagree)

TVreporter
Thread works flawlessly with the Nanoleaf bulbs and strips I have via my HomePod Mini.

These will be purchases for me - Thread is the future, I think, in smart home products.
Score: 3 Votes (Like | Disagree)
Read All Comments