Apple this week announced a new subscription feature coming to the Podcasts app in May that will let podcast publishers sell subscriptions to an individual show or a group of shows, with pricing starting at 49 cents per month. 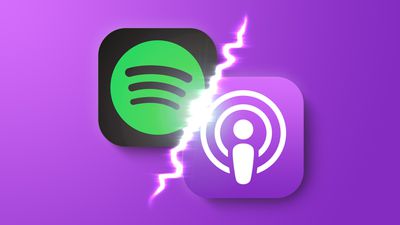 Publishers will be able to set their own pricing, but Apple will reportedly take a 30% of subscription revenue that creators generate in their first year on the platform, and after that, Apple will collect 15%. This is the same pricing setup that Apple uses for other subscription options.

According to a new report from The Wall Street Journal, Spotify will announce a similar podcast subscription feature next week, but in contrast to Apple, the rival streaming service won't be collecting revenue on any of the content it hosts.

The potential announcement from Spotify will pose a dilemma for some content creators looking to monetize their content on Apple devices. On the one hand, Apple's Podcasters Program, which is priced at $19.99 per year, promises a streamlined method of distribution through the Podcasts app, which comes pre-installed on all Apple devices.

On the other hand, Spotify commands a much larger subscriber base and isn't locked into Apple's ecosystem. Spotify has also been making inroads in the podcasting market over the course of the last few years, ramping up its original podcast offerings and making major acquisitions like Gimlet Media, Parcast, and Anchor, as well as scoring key deals such as the rights to the popular Joe Rogan Experience podcast. According to one prediction, Spotify could soon have more podcast listeners than Apple.

How Spotify's announcement goes down will be interesting to watch. Apple won't require podcast creators to create content exclusively for Apple, but it does have a number of partners on board ready to create premium podcast content, including Tenderfoot TV, Pushkin Industries, Radiotopia from PRX, and QCODE, NPR, the Los Angeles Times, The Athletic, Sony Music Entertainment, and more. How many grassroots podcast creators it will be able to attract remains to be seen.

Do you know what else they won’t be doing? Paying Artists.

labels take most of the money anyway. The biggest problem are the labels, not the vendor
Score: 8 Votes (Like | Disagree)

mnsportsgeek
Do you know what else they won’t be doing? Paying Artists.
Score: 8 Votes (Like | Disagree)

imlovinit
Hmm I like Spotify but I don’t think it’s too smart not to collect any revenue off of hosting creative podcasts especially given the bigger platform. They would eventually need to collect something and better off asking lower amount IMO.

edit: just saw the other article about Spotify claiming they have to charge more for iOS users bc of apples cut, yet they’re willing to give away free hosting for content creators. yikes.
Score: 7 Votes (Like | Disagree)

Hmm I like Spotify but I don’t think it’s too smart not to collect any revenue off of hosting creative podcasts especially given the bigger platform. They would eventually need to collect something and better off asking lower amount IMO.

edit: just saw the other article about Spotify claiming they have to charge more for iOS users bc of apples cut, yet they’re willing to give away free hosting for content creators. yikes.

- Free hosting on this may have a great conversion rate towards Spotify’s paid offering. Netting profit. While having far greater customer attraction than a paid version.
- The podcast segment is immature and growing, the big companies are fighting for turf. Having an attractive offer towards content creators like this dents Apple’s current value proposal.
- Apple’s cut has a massive impact on a substantial share of their revenue. Also it impacts the entire customer lifetime value for a subscription service. I have no opinion on this, but that’s why Spotify engages in the mechanic.

Will be interesting to see if Apple responds. Typically they’re very hesitant to change subscription mechanics. So it’s probably an effective move by Spotify.
Score: 6 Votes (Like | Disagree)

Td1970
My god. Don’t worry about what Spotify does. Especially if you dont use it. Then insecurity of some Apple fans is incredible
Score: 6 Votes (Like | Disagree)

farewelwilliams
yet, they have one of the lowest royalty rates paid out to musicians for music streaming. how about fix that problem.
Score: 4 Votes (Like | Disagree)
Read All Comments