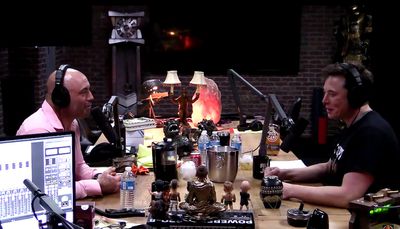 (Image credit: POWERFULJRE/YOUTUBE)
Spotify's deal with Rogan means that video and audio of each episode will be listed on Spotify from September 1, with an agreement to make the show exclusively available to Spotify subscribers sometime later in the year, according to a press release.


Since its launch in 2009, the pioneering Joe Rogan Experience (JRE) has broken ground and built one of the most loyal and engaged fan bases in the world. Rogan brings his sensibilities as a stand-up comic to the show, and alongside dynamic and diverse guests, he fearlessly broaches far-ranging topics including neuroscience, sports, comedy, health, infectious disease, and our ever-changing culture—all with a mix of curiosity and humor.

In addition to the wildly popular podcast format, JRE also produces corresponding video episodes, which will also be available on Spotify as in-app vodcasts.

The announcement is a clear signal that Spotify sees its push into podcasts as a long-term commitment. The Joe Rogan Experience is one of the longest-running shows and often dominates Apple's podcast charts. Last year the show was said to have reached about 190 million downloads a month.

Spotify says that Rogan will retain creative control over his show, but didn't reveal how much it paid to clinch the deal. In an audio message accompanying the press release, Rogan said: "It will be the exact same show. I will not be an employee of Spotify." Spotify said it will also work with an ad agency to jointly sell ads alongside the show.

Spotify first began its efforts to enter the podcast field around three years ago, when it said it was "coming after" Apple with a strong push into podcasts. The last few years have been marked as a so-called golden age for podcasts, causing many companies to look into entering the field.

More signs of Spotify's intention to double down on its podcasts offering were relayed last year, shortly after it acquired several podcast creation companies including Gimlet Media for $300 million.

Spotify said it planned to create new and exclusive podcasts for subscribers, and also revealed that the team that developed its Discover Weekly algorithms was working on a discovery engine for podcasts. Spotify also purchased Anchor, a company that lets users record and create their own shows that can be easily shared online.

Marshall73
It was guaranteed that this would happen at some point with podcasts. The best thing about podcasts was they were app independent, as they get tied to platforms I won't be listening anymore.
Score: 27 Votes (Like | Disagree)

jameswilby
Well... Spotify seem to have no clue that podcasts aren’t an area for competition of exclusivity. Apple had the chance years ago but allowed it to remain a free and open concept of sharing. “Coming after” Apple isn’t a good thing for consumers when they do it like this
Score: 24 Votes (Like | Disagree)

harambe4ever
Not installing Spotify on my phone. See ya Joe!
Score: 22 Votes (Like | Disagree)

Rogan is an idiot for taking whatever deal they made.

Staying independent is what made podcasts great and Joe could have made more from staying like that.

And you know this because you are his accountant or banker and have deep knowledge of his financial situation...?

I agree. I watch his podcasts on YouTube, as I pay for YouTube Premium. If I'm out running/walking I'll use the free Apple podcasts app. I also pay for SoundCloud for music. There's no way I'm adding an additional Spotify subscription, I really don't need it.

Something tells me you would not have written this if he had signed a deal with Apple.
Score: 16 Votes (Like | Disagree)

caliguy
Joe said in his message that it will continue to be offered for free. I don’t think you need a Spotify subscription, as others are saying.

A move off of Google/YouTube is a good thing. I hope their censorship practices begin their downfall.
Score: 14 Votes (Like | Disagree)

johannnn
Is the podcast world very slowly becoming the new TV world where you need a gazillion different subscriptions to get all shows? Will I need 5-10 different podcast players in a few years?

Crazy that a single podcast made the Spotify stock jump 8% yesterday. I read rumors about Joe getting 100 million bucks for the deal.
Score: 11 Votes (Like | Disagree)
Read All Comments