Apple today announced a new podcasts subscription feature that's coming to the Podcasts app. Podcast subscriptions will let podcast publishers sell subscriptions to an individual show or a group of shows, with pricing starting at 49 cents per month. 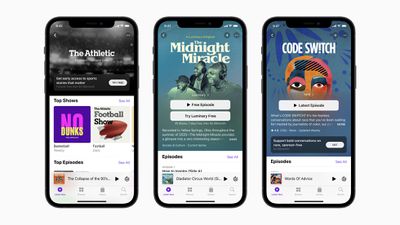 Publishers will be able to set their own pricing, but according to Recode, Apple plans to take a cut. Apple will collect 30 percent of subscription revenue that creators generate in their first year on the platform, and after that, Apple will collect 15 percent. This is the same pricing setup that Apple uses for other subscription options.

Apple does not plan to require podcast creators to create content exclusively for Apple, but it is encouraging them to distinguish between content available from Apple Podcasts and content on other platforms, such as ad-free shows, shows with extra content, or early or exclusive access to new content. Those who want to participate will need to sign up for the Apple Podcasters Program, which is priced at $19.99 per year.

Podcast creators will be able to start offering subscriptions as of next month, with subscriptions available to listeners in more than 170 countries and regions. Up to six family members can share a subscription.

Apple has a number of partners on board ready to create premium podcast content, including Tenderfoot TV, Pushkin Industries, Radiotopia from PRX, and QCODE, NPR, the Los Angeles Times, The Athletic, Sony Music Entertainment, and more.

Because of course they will...
Score: 12 Votes (Like | Disagree)

Wildkraut
Podcast going that route will die.
Podcasts paid by ads are fine, just like it currently is.

Apple platform is becoming less and less appealing with every device and os release.
They are trying to make almost everything to money, and set their feet into stuff by doing nothing.
Amazing blood suckers!
Score: 11 Votes (Like | Disagree)

jefhai
I will boycott or subvert any podcasts that require a subscription... if I want to give to them I’ll give to them directly
Score: 10 Votes (Like | Disagree)

Then better choose a payment method that 100% goes to the creator, that way you support them even more.
Apple would get 15%-30% for doing nothing other than playing the gatekeeper again.

I don't think you realise how many more people would click a simple button inside the podcast app and subsribe to the podcast producer with one click all in the same app rather than do the effort to go to their patreon page and deal with a bunch of external stuff.
Score: 5 Votes (Like | Disagree)

Podcast going that route will die.
Podcasts paid by ads are fine, just like it currently is.

Apple platform is becoming less and less appealing with every device and os release.
They are trying to make almost everything to money, and set their feet into stuff by doing nothing.
Amazing blood suckers!

Nothing in life is free.

I use Pocket Casts but the discovery for it mostly features whodunnit or muder related podcasts anymore, I welcome a better selection of curated content if it works well for most.

Apple's ecosystem gets better and better for me each year.
Score: 4 Votes (Like | Disagree)

I will boycott or subvert any podcasts that require a subscription... if I want to give to them I’ll give to them directly

Or I'll listen to ads... which has worked for the last 15 years.
Score: 4 Votes (Like | Disagree)
Read All Comments