Apple's AirTag tracking devices can be identified by Android phones when they're in Lost Mode, according to a new support document published by Apple. 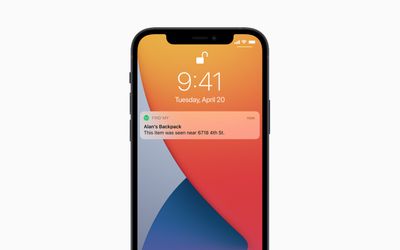 Announced on Tuesday, Apple's new AirTag item trackers let you easily track things like your keys, wallet, purse, backpack, luggage, and more. They work using an ultra-wideband U1 chip to keep in touch with the Find My network.

However, what Apple didn't highlight in its announcement is that when an AirTag is placed in Lost Mode by the user, its discovery message be read by any NFC-enabled device, including not just iPhones but also Android phones.

According to Apple, tapping an AirTag and holding the white side to an iPhone or other NFC-capable device will display a notification with a tappable link that offers information about the AirTag, including whether it has been marked as lost by the owner and their contact details. From the support document:

Tap and hold the top of your iPhone or NFC-capable smartphone to the white side of the AirTag. Tap the notification that appears. This opens a website that provides information about the AirTag, including its serial number. If the owner marked it as lost, you might see a message with information about how to contact the owner. You can contact the owner to let them know that you found their AirTag. You can view a Lost Mode message on any NFC-capable smartphone, such as an iPhone or Android phone.

It's worth noting that AirTags require an iOS device and ‌Find My‌ to set them up, so it's not as if this means the trackers will be useful to Android users, but their NFC compatibility does mean that Apple users have a higher chance of recovering lost items.

‌‌AirTags‌‌ start at $29 each or $99 for a four-pack. Online orders open this Friday, April 23, with ‌‌AirTags‌‌ shipping April 30.

tomekwsrod
Do AirTags support geofencing? Can I set it in a way that if a tag leaves a certain perimeter or becomes out of range, I will be alarmed?
Score: 7 Votes (Like | Disagree)

_Spinn_
This is actually pretty smart on Apple’s part. This make AirTags even more useful for finding lost items.
Score: 6 Votes (Like | Disagree)

snow755
I wounder if airtag will have firmware updates
Score: 4 Votes (Like | Disagree)

Homme
Love how even original iPhone SE support AirTags and can also use its NFC to read a lost AirTag and the original 6/6+ can’t ?
Score: 4 Votes (Like | Disagree)

Do AirTags support geofencing? Can I set it in a way that if a tag leaves a certain perimeter or becomes out of range, I will be alarmed?

That would be excellent for tracking kids and dogs.
Score: 2 Votes (Like | Disagree)

raindogg
I can see using them for keys and pets, but how can you misplace a backpack or suitcase?
Score: 1 Votes (Like | Disagree)
Read All Comments

Thursday April 29, 2021 2:05 pm PDT by Juli Clover
It's April 30, aka AirTags launch day, and customers who purchased AirTags or a purple iPhone 12 from Apple when orders went live last week are now beginning to receive their new devices. Apple fans in Australia and New Zealand are always the first to get their hands on new devices due to time zone differences, and are now sharing photos and first impressions on social media networks. @Mac ...
Read Full Article • 67 comments

It's Possible to Drill a Hole Through an AirTag

Friday April 30, 2021 7:53 am PDT by Joe Rossignol
Unlike a Tile or some other item trackers, Apple's new AirTag does not have any holes or openings for attaching it directly to a keychain, forcing customers to purchase accessories like a leather key ring for this purpose. Interestingly, though, MacRumors forum member smythey has proven that it is possible to drill a hole into the AirTag without breaking it, allowing for a string or a thin...
Read Full Article • 241 comments