Despite only being released in November, sales of the M1-powered MacBook Air, MacBook Pro, and Mac mini now represent the majority of Mac sales, outperforming Mac computers powered by Intel processors, according to Apple CEO Tim Cook. 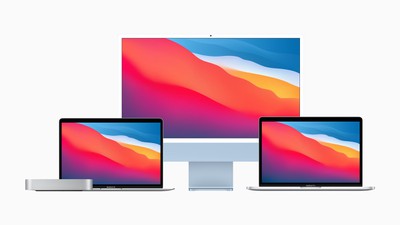 Cook made the remarks during Apple's "Spring Loaded" event yesterday, where it introduced a completely redesigned 24-inch iMac powered by the M1 Apple silicon chip. Cook says that the ‌M1‌ and Apple silicon "isn't just an upgrade, but a breakthrough," while touting Mac's industry-leading customer satisfaction.

Apple announced at WWDC 2020 that it would embark on a two-year-long transition to its own silicon for its entire Mac lineup, breaking away from Intel. With the launch of the first Apple silicon-powered iMac yesterday, Apple now sells four Mac computers powered by Apple silicon. Alongside them, Apple continues to sell a 16 and 13-inch MacBook Pro, 21.5-and 27-inch ‌iMac‌, and the high-end Mac Pro, all with Intel processors.

According to Cook, the four M1-powered Macs now outperform the five remaining Intel-powered computers in its lineup in terms of sales. During the keynote, Cook's comment went largely unnoticed but is likely to be a key point the CEO makes during Apple's upcoming earnings call, which is being held on April 28.

LarrySW
M1 replaced the entry level machines for Air, Pro and mini, which I assume were already the best sellers over the more expensive options in the categories so this doesn't surprise me too much.
Score: 21 Votes (Like | Disagree)

You both forgot the /s mark
Score: 18 Votes (Like | Disagree)

Mgkwho
Bake that airtag tech into portable M1 macs so that they can be located even when powered off and moved (ie stolen), and I’ll buy!
Score: 17 Votes (Like | Disagree)

I'm surprised by the lower 8 GB ram. Is that because the M1 is so power efficient that we don't need a pile of Ram?

I use my MP for photo editing (Capture One - who are working on a native M1 version) and occasional video editing (although could be more if it wasn't choppy now).

I might jump on a 27" iMac someday. Or a newer Mac Pro.
For now I'm holding on, but it's 8 years old and starting to chunk a bit with larger files (12 core, tons of Ram). I'd love to see the efficiency difference between an M1 iMac. Hopefully there will be YT reviews (by power users) soon enough.

The default 8GB RAM is just a planned obsolescence tactic by Apple. The M1 has such great performance that consumers might stick with it for a long time, so Apple put 8GB RAM as default to increase wear and tear on the SSD. Since users cannot upgrade the RAM nor SSD themselves, people will end up having to just replace the whole computer sooner.
Score: 16 Votes (Like | Disagree)

Here we are Larry. The M1 is a tenth of the speed of the best AMD processor. Your needs may vary of course.

Are you seriously going to compare the M1 with its 8 cores and 20 something watt power consumption to a 64 core threadripper that costs $5k and draws over 10X the power?
Score: 11 Votes (Like | Disagree)

You're the one that made the comment, so back it up instead of deflecting. I am genuinely curious which processors you're referring to.
Score: 10 Votes (Like | Disagree)
Read All Comments

Tuesday November 10, 2020 10:05 am PST by Joe Rossignol
Apple's virtual "One More Thing" event is underway and, as expected, the company has started discussing its transition to Apple Silicon for Macs. Apple first revealed its plans to transition from Intel processors to its own custom Apple Silicon processors for Macs during its WWDC keynote in June, promising industry-leading performance per watt. At the time, Apple said that it planned to ship ...
Read Full Article • 14 comments

Monday December 14, 2020 7:56 am PST by Joe Rossignol
Apple recently shared a list of popular apps optimized for Macs with the M1 chip that are available in the Mac App Store, such as Pixelmator Pro, Adobe Lightroom, Affinity Designer, Darkroom, Fantastical, BBEdit, Instapaper, and Twitter. "Macs with the new Apple M1 chip offer unprecedented performance, and developers can optimize their apps for the M1 to deliver game-changing speed and...
Read Full Article • 36 comments

Wednesday March 17, 2021 5:10 am PDT by Sami Fathi
Intel has called on the services of former "I'm a Mac" actor Justin Long in a series of new ads in which Apple's latest custom-made M1 processors are cast as inferior to newer laptops powered by Intel processors. Well known for his role in Apple's popular "Get a Mac" TV ad campaign from the 2000s, Long stars in a series of ads called "Justin Gets Real" on Intel's YouTube channel, beginning...
Read Full Article • 871 comments