Microsoft has today announced that it will launch its browser-based Xbox Cloud Gaming service in beta to selected testers on iPhone and iPad tomorrow. 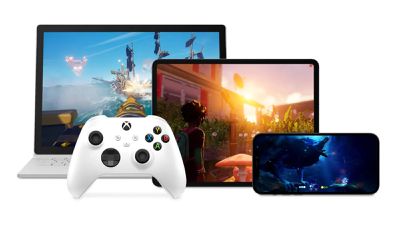 Starting tomorrow, Microsoft will begin sending out invites to selected Xbox Game Pass Ultimate members to test the Xbox Cloud Gaming limited beta for ‌iPhone‌, ‌iPad‌, and Windows 10 PCs using a web browser. Invites will be issued on a continuous basis to players in all 22 supported countries.

The new in-browser cloud gaming platform will be available at xbox.com/play, and will work in Safari, Google Chrome, and Microsoft Edge. Microsoft plans to "iterate quickly" on the beta, and open up to all Xbox Game Pass Ultimate members in the coming months. Games will be playable via a controller or touch controls for more than 50 games at first.

This will be the first time that Xbox Game Streaming has been available on ‌iPhone‌ and ‌iPad‌ since the service launched exclusively on Android devices last year. Last year, plans to bring an Xbox game streaming app to iOS stalled due to Apple's App Store rules, which forbids apps from streaming multiple games from the cloud via a single app. This is because Apple believes that its inability to review each game in the service's library is a potential security risk. Game Pass streaming would only be viable if each game was available as its own app under Apple's rules.

Microsoft then suggested that it would use a browser instead of an app to avoid Apple's ‌App Store‌ rules while still providing the same service. Microsoft says that creating a browser-accessible service has a number of advantages in making cloud gaming more accessible, as well as streamlining development into a singular, universal platform.

Microsoft's games streaming service is bundled as part of the Xbox Game Pass Ultimate subscription for $14.99 per month, with more than 100 games available.

Update: Beta testers invited to the program have confirmed to MacRumors, despite it not being mentioned in Microsoft's press release, that the Xbox Cloud Gaming beta also works on macOS.

JCCL
Good for Microsoft for not giving up on Apple users despite Apple’s own stupid rules. Looking forward to trying this out.
Score: 21 Votes (Like | Disagree)

I believe the reasons are more based on App Store limitations, like having to have every single game as a standalone separate icon on the springboard rather than a single Xbox app. (Imagine how messy that would be if you have a huge game library.)

These App Store restrictions make it such that a browser based experience is the only ‘good’ option for iOS users.
Score: 17 Votes (Like | Disagree)

"Microsoft then suggested ('https://www.macrumors.com/2020/11/25/xbox-boss-discusses-arcade-app-store-fees/') that it would use a browser instead of an app to avoid Apple's ‌App Store‌ rules while still providing the same service."

Uh, the way they short-change Mac users with MS 365 I'm certain that the Windows customers will have a far better experience with a dedicated app. Sorry Microsoft, I'm not buying your BS reason for no Mac dedicated app.

The reason they don't have an app is because Apple won't let them. It's complete BS too, as it's no different from Netflix, Hulu, or any of the other streaming site. Apple doesn't get to curate those on an individual title basis.

The reason Apple is hypocritical here is that Gamepass competes with what they're trying to do with arcade.

I love apple, but this is one thing I simply cannot support them on. At least Xbox/Gamepass users won't have to suffer much longer.
Score: 12 Votes (Like | Disagree)

mrat93
As an Apple diehard, I was scared that Apple had allowed something spooky like game streaming into the App Store without having individual listings for games ?

Happy that this is browser-based so I can feel safe in my walled garden.
Score: 10 Votes (Like | Disagree)

jlocker
I got the Xbox series X at launch at Christmas, I got this as my backup gaming system as Bootcamp and Windows 10 fades away on the Mac. I think it is great that they now have xCloud on the IOS. So At least I can play games on iPad, I don't want another gaming system like the Nintendo switch to play games remotely so this is kind the best of all worlds.

The xbox series X is a fantastic gaming console, with tons of great games new and old and now with xcloud XCloud it has gotten even better.
Score: 9 Votes (Like | Disagree)

AxiomaticRubric
If it works for you, great, but if you live in a rural area, good luck getting the internet bandwidth you need to play the AAA titles.

StarLink will definitely help remote areas but satellite signals can be blocked by bad weather. ☹️
Score: 5 Votes (Like | Disagree)
Read All Comments

Monday February 15, 2021 5:30 am PST by Sami Fathi
Microsoft has begun testing its game streaming service, xCloud, on the web via a browser for iOS and iPadOS, and on PC via Google Chrome and Microsoft Edge, The Verge reports. Microsoft's xCloud service allows subscribers to play games by streaming them from the cloud, instead of having to download the entire game locally on-device. Apple and Microsoft had a brief moment of contention in...
Read Full Article • 90 comments

Wednesday December 9, 2020 6:32 am PST by Hartley Charlton
Microsoft has today announced that its cloud-based gaming subscription service, Xbox Game Pass Ultimate, will be available to iOS users starting Spring 2021. The announcement detailed that, as expected, Game Pass will not be coming to iOS via an app, but rather through a web browser. In Spring 2021, we will take the next step in our journey to reach more players around the world by...
Read Full Article • 90 comments

Thursday November 19, 2020 9:37 am PST by Juli Clover
Google today announced that Stadia, its cloud gaming service, will be coming to iPhone and iPad in the near future through an upcoming web app. Since launch, Google has not been able to bring Stadia to iOS devices because of Apple's restrictions on cloud gaming services. Apple in August said that cloud gaming services were allowed on the App Store, but that each individual game must be...
Read Full Article • 62 comments

Friday September 25, 2020 11:58 am PDT by Juli Clover
Microsoft is testing a new version of its Xbox app that will let Xbox users play games remotely on their iPhones and iPads using streaming functionality. The new feature was rolled out to TestFlight users this morning. The Xbox streaming option is distinct from Microsoft's xCloud service, which it has been clashing with Apple over. xCloud is designed to stream games from Microsoft's servers, ...
Read Full Article • 124 comments

Thursday August 6, 2020 1:06 pm PDT by Juli Clover
Microsoft's "Project xCloud" streaming game service that pairs with its Xbox Game Pass won't be available on iPhone and iPad when it launches this September, and Apple's App Store restrictions are to blame. Xbox Game Pass and its accompanying xCloud streaming feature offer access to hundreds of games that can be streamed to mobile devices, and Apple says that because it can't review each...
Read Full Article • 524 comments

Monday October 19, 2020 5:33 pm PDT by Juli Clover
Microsoft today released an updated version of its Xbox app designed for the iPhone and the iPad, which will allow Xbox users to play their games remotely on their Apple devices using streaming functionality. Microsoft has been testing this feature for a few weeks, first providing it to Xbox app beta testers back in September. From the app's release notes:- Set up new consoles and queue...
Read Full Article • 74 comments