Microsoft's upcoming "Project xCloud" game streaming service is set to launch on September 15th, exclusively on Android devices. Despite extensive testing via TestFlight on iOS, xCloud's launch on iOS seems to have been postponed indefinitely. 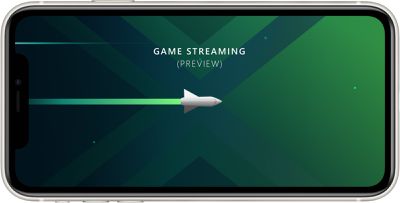 Project xCloud is Microsoft's "vision for game-streaming technology that will complement our console hardware and give gamers more choices in how and where they play." xCloud will be bundled as part of the Xbox Game Pass Ultimate subscription for $14.99 per month, with more than 100 games available.

App Store guidelines ban services that rely on streaming games from the cloud. Cloud gaming services, where users stream games live via an internet connection, are growing in popularity.

Although Microsoft has been trialing xCloud on iOS with a closed public preview of 10,000 testers, the company previously stated that testing was limited due to Apple's ‌App Store‌ policies. Unlike the Android version, the app was limited to streaming games from the cloud only, excluding the ability to stream games from an Xbox console.

"To comply with App Store policies, the preview experience on iOS may look and feel different for those who have been testing on Android," Microsoft warned ahead of launching the preview.

Only one title, "Halo: The Master Chief Collection," was available on the TestFlight app. This is because ‌App Store‌ rules state that "games offered in a game subscription must be owned or exclusively licensed by the developer."

"It's our ambition to scale cloud gaming through Xbox Game Pass available on all devices, but we have nothing further to share at this time regarding iOS," a Microsoft spokesperson told The Verge.

Apple initially rejected Valve's Steam Link app due to "business conflicts," and it took almost a year to eventually be approved. Steam Link and Sony's PS4 Remote Play was approved only because the ‌App Store‌ allows remote desktop technology, but it is limited to devices on the same network.

The TestFlight preview of xCloud has ended today and will no longer function. This is due to Apple's automatic expiry date on all TestFlight apps, indicating that it has been 90 days since the preview was updated. The future of xCloud on iOS now seems to be uncertain, and it is unknown whether development will continue.

HiVolt
Its simple, they disallow it because they can't monetize it. its a joke.
Score: 28 Votes (Like | Disagree)

Pretty cut and dry. Apple doesn't accept apps like this. Want it? Buy an Android and move on.

Thanks for your divine input. ?
Score: 26 Votes (Like | Disagree)

hlfway2anywhere
Apple needs to address this and find a solution. It’s getting to be absurd. I’m embarrassed for them.
Score: 23 Votes (Like | Disagree)

Sethal
This is very upsetting for a lot of potential xCloud users and why these antitrust hearings and similar are necessary.
Score: 20 Votes (Like | Disagree)

JKAussieSkater
I really hope the EU antitrust investigation into the App Store leads to resolving this problem once and for all:

Give power to the people, and let them make their own choices about what apps they want on their phones.
Score: 19 Votes (Like | Disagree)
Read All Comments