The upcoming 12.9-inch iPad Pro will be thicker than the previous-generation version, likely due to the inclusion of the mini-LED display. We've heard several rumors about the change in thickness, and now leaked design images have confirmed it. 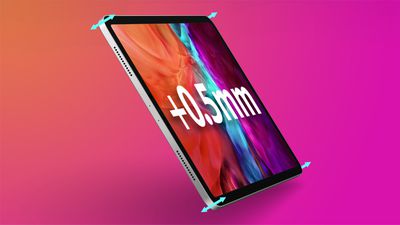 A source that designs accessories for Apple devices sent MacRumors a series of photos that feature exact dimensions for the new ‌iPad Pro‌ models, and while we can't share the images themselves, we can share the leaked measurements, which are in line with measurements shared by Mac Otakara in February.

The 12.9-inch model will measure in at 280.65mm long (11.04 inches), 215mm wide (8.46 inches) and 6.4mm thick (0.25 inches). With the exception of the thickness, those dimensions are about the same as the dimensions of the current ‌iPad Pro‌, and that matches up with rumors we've heard suggesting that there will be few design changes to the device.

6.4mm is 0.5mm thicker than the thickness of the current 12.9-inch ‌iPad Pro‌, which is 5.9mm thick. The change in thickness may be due to the inclusion of the mini-LED display, a feature that will be unique to the 12.9-inch model.

Prior rumors have indicated the camera lenses of the new ‌iPad Pro‌ models will protrude less, and there will be some small changes to the size of the camera bump. The design drawings suggest the camera bump will measure in at 27.67mm by 27.67mm, slightly larger than the prior 27mm x 27mm camera bump.

There could, however, be more drastic changes to the camera bump size than on the 12.9-inch model. The current 11-inch ‌iPad Pro‌ has a camera bump that measures in at 26.7mm by 26.7mm, but the new version's camera bump may be smaller at 25.3mm by 25.3mm.

These design drawings were provided by a source that MacRumors has not worked with in the past, but the information we've received lines up with what we've heard from prior rumors. We can't verify the information with complete confidence, but it's likely that the details shared with us are accurate.

Aside from these minor design changes and the introduction of a mini-LED display for the 12.9-inch ‌iPad Pro‌, the new models could feature Thunderbolt connectivity and faster A14X chips on par with the M1 chips in the current Mac lineup. Apple will announce the new ‌iPad Pro‌ models at tomorrow's "Spring Loaded" event.

We could also see the debut of the long-awaited AirTags, and there could also be other new low-cost iPad and iPad mini models in the works, plus there's a chance Apple will introduce updated iMacs. We have a full list of what to expect in our April Event Guide.

The upcoming 12.9-inch iPad Pro will be thicker than the previous-generation version

MacMikePro
Whatever this is perfectly fine, but you know what really grinds my gears?

Every day that goes by without any leak or rumor or so much as a whisper of any indication that the Face ID camera is moving to the long side of the iPad, right next to where the Apple Pencil charges, is a day wasted in my opinion. I use the iPad in landscape 95% of the time and my left hand is always covering the damn Face ID when I need to use it and it drives me nuts lol. Plus it makes way more sense to have it there when docked with the Magic Keyboard, so during FaceTime etc you're looking straight on, you know like the MacBook. MOVE THE DAMN CAMERA APPLE!

countryside
Fine by me! Make it even thicker for bigger battery too! I like how sturdy these thicker Pro models feel. It is a much more premium product than the thin aluminum design.
Score: 27 Votes (Like | Disagree)

richpjr
As long as my Magic Keyboard still works with it...
Score: 19 Votes (Like | Disagree)

ruka.snow
I was sure miniLED allowed thinner devices. But no one is going to fuss over 0.5mm.
Score: 19 Votes (Like | Disagree)

We're in a loop. An Infinity Loop.
Score: 15 Votes (Like | Disagree)
Read All Comments

Friday March 26, 2021 4:57 am PDT by Tim Hardwick
Apple's rumored AirTags item trackers will be slightly larger than a 50 cent coin and around three times the thickness, based on dimensions offered by leaker Max Weinbach (via YouTube channel EverythingApplePro). According to Weinbach, the AirTags will come in one size measuring 32mm x 32mm x 6mm, which would put the circular devices in the same ballpark diameter-wise as a half dollar piece ...
Read Full Article • 262 comments

Thursday January 7, 2021 7:57 pm PST by Eric Slivka
Following up on its report from yesterday about the next-generation iPad and iPad Pro models, Japanese site Mac Otakara has released a new report sharing some additional details about the upcoming iPad Pro models. The report claims that updated 11-inch and 12.9-inch iPad Pro models should be arriving in March and that the overall design remains the same as the existing models with a few...
Read Full Article • 94 comments

Monday May 24, 2021 9:00 am PDT by Eric Slivka
Anker today is introducing a new set of gallium nitride (GaN) USB-C chargers that offer fast charging speeds for mobile devices in a design that's smaller than ever. The new Nano II line is available in 30W, 45W, and 65W versions, and Anker says it has improved the chips and internal layout of its chargers to deliver greater efficiency while generating less heat. The 30-watt charger measures ...
Read Full Article • 58 comments