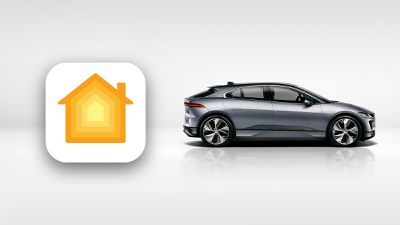 The setup, which is outlined in detail on the blog Practical HomeKit, allows multiple elements of a Jaguar I-Pace electric vehicle to be monitored, controlled, and automated using the Home app.

Using a HomeBridge plugin for the Jaguar InControl API called homebridge-jlr-incontrol, Ellis was able to feed data about the vehicle, such as charging status, charge level, pre-conditioning, and more, into ‌HomeKit‌, as well as send back basic commands. The plugin apparently required "a fair amount" of manual configuration and presented a few warnings, but it works correctly just like many other HomeBridge-based workarounds for ‌HomeKit‌.

Many functions of the vehicle, including climate control, pre-conditioning, locking and unlocking, and charging, are now viewable and controllable in the Home app from any location.

Integration into the Home app allows automations to be created based on battery level, such as automatically charging the car from a HomeKit-enabled power outlet when the battery percentage is low. Ellis also has an automation to pre-condition the temperature of the car and its batteries based on events in the Calendar app. It is also possible to automatically unlock the car at a time of day or under certain conditions.

To accompany the Apple-oriented vehicle upgrades, Ellis added wireless CarPlay. Jaguar does not support wireless ‌CarPlay‌, but Ellis was able to implement the feature herself using a wireless ‌CarPlay‌ adapter called CPLAY2air. Ellis also mounted a MagSafe charger on the dashboard for convenient iPhone charging.

Although this setup has to be created manually via HomeBridge, it shows how it may be useful to add a vehicle to ‌HomeKit‌. Integration with ‌HomeKit‌ opens up the possibility of creating useful Shortcuts as well as Home automations for the vehicle.

With services such as ‌CarPlay‌ available in most new vehicles, new services such as Car Keys expanding, and Apple collaborating with brands such as BMW and Porsche to bring Apple-integrated features to vehicles, it is not inconceivable to think that an official ‌HomeKit‌ integration for cars could be added in the future, especially in view of proof-of-concept projects such as this.

Siobhan Ellis
Oh wow. I’m the person who did this. I’m just writing a blog on what I do with home integration. Never expected this to get such wide attention.

I knew about the Tesla plug-in, as I’d told a friend of mine about it, so I wondered if there was one for the Jaaaag, and there was.
Score: 16 Votes (Like | Disagree)

You write this like they’ve done something only they have achieved. Why is this article worthy? I’ve been automating my Tesla from HomeKit for 4 years!

Should try to do the same thing for my Tesla - shouldn't be too hard since Tesla has 3rd party API. Homebridge is awesome to bring unsupported devices to HomeKit (the Ring integration e.g. is even better than what Ring integrates into Alexa which is surprising since both are owned by Amazon).

dannys1
You write this like they’ve done something only they have achieved. They've installed a Homebridge plugin someone else wrote in October...Why is this article worthy? I’ve been automating my Tesla from HomeKit for 4 years as have hundreds of other people.
Score: 5 Votes (Like | Disagree)

dannys1
You write this like they’ve done something only they have achieved. Why is this article worthy? I’ve been automating my Tesla from HomeKit for 4 years

I had no idea this was possible. I thought HomeKit was completely locked down and nothing that didn’t have support built in could be integrated with it. If I ever get into automation and IoT, I’ll be sure to give HomeBridge a go!

it’s probably the most open and flexible platform there is with Homebridge. There’s more third party integration than even SmartThings or Hubitat
Score: 5 Votes (Like | Disagree)