Porsche has partnered with Apple to integrate Apple Music into its forthcoming Taycan EV, the German car manufacturer revealed on Monday (via TechCrunch). 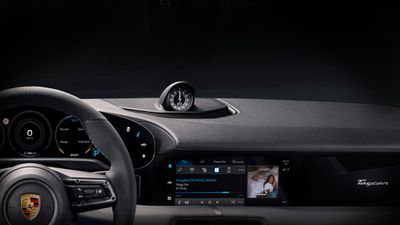 The announcement means owners of the all-electric sports car will be able to access Apple's music streaming service via the car's touchscreen infotainment display without having to connect a smartphone.

This is the first time ‌Apple Music‌ will be available as a native app in any vehicle. Previously the only way to access the service was by pairing a phone via Apple's proprietary CarPlay dash interface.

Porsche says ‌CarPlay‌ will also be included in the Taycan EV, but customers will get direct access to ‌Apple Music‌'s library of songs, curated playlists, and Beats 1 radio station through the car's built-in cellular connection.

All they'll need to do is link their Apple ID with their Porsche account, after which they'll be able to control ‌Apple Music‌ using the Taycan's voice assistant system.

Porsche says users will also be able to create a custom ‌Apple Music‌ station from any song they hear while listening to broadcast radio. The German car manufacturer also plans to release exclusive playlists that will only be available through ‌Apple Music‌.

Porsche intends to give new and existing customers free access to ‌Apple Music‌ for six months. TechCrunch reports that it also eventually plans to add the ‌Apple Music‌ app to all of its new vehicles that can support the service.

‌Apple Music‌ costs $9.99 a month for an individual membership. The streaming service recently surpassed 60 million subscribers, and making it available natively in cars makes sense given Apple's increasing reliance on services as a source of revenue.

The partnership arguably mirrors the deal Apple has with Samsung to integrate iTunes movies and TV shows, as well as AirPlay 2 support, into its latest smart TVs.

The all-electric Porsche Taycan is set to be unveiled in early September, and should be on sale before the end of the year.

Porsche has never interested me even with Apple Play.

This past Sunday I saw a guy parking his Carrara in a secluded spot in a strip mall lot. As he and his wife started their long hike to the coffee shop I parked my Nissan next to it.

This post doesn't make you sound like the cool person you think you are. And it's spelled CARRERA. Carrara is a city in Italy.
Score: 15 Votes (Like | Disagree)

Unlikely. Tesla is partnered with Spotify in Europe and it will apply soon to US customers too. It's brilliant, and "free" as included in the cost of the car, so no subscription required.
Score: 5 Votes (Like | Disagree)

wonder when this will trickle down to Audi & VW

They've had CarPlay for years. I don't see the point of a standalone app when you have CarPlay anyway...
Score: 4 Votes (Like | Disagree)

Does Apple Music mean music I own(bought from iTunes) or it only works with that daft service?

Why is it a daft service?
Score: 3 Votes (Like | Disagree)

Veinticinco
So basically a 6-month bundled trial of built-in AM?

Think I’ll stick with CarPlay Spotify on my next $120k electric car.
Score: 3 Votes (Like | Disagree)
Read All Comments