Apple and Google have blocked an update to England and Wales' contact tracing app that included a feature that would have collected user location data, breaking the companies' terms and conditions for contact tracing apps, the BBC reports. 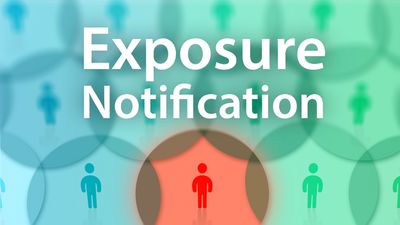 Last year, Apple and Google partnered up to announce a COVID-19 contact tracing API that allows apps to track whether someone has been in contact with an individual who has tested positive for COVID-19.

When visiting a shop, restaurant or other public venue, users of the NHS COVID-19 app can scan a QR code to indicate that they've been at that location. Using the API, the NHS app checks a database to look for a match, and can inform the user if they need to self-quarantine and/or get tested if someone at the same location recorded a positive COVID-19 test result that was flagged by other means.

The U.K.'s National Health Service in England and Wales had planned to release an update to its app that would have asked COVID-19 positive users to upload a log of their QR code check-ins. However, according to the terms and conditions which govern Apple and Google's contact tracing API, any app that uses the API cannot collect user location data.

The plan had been to ask users to upload logs of venue check-ins - carried out via poster barcode scans - if they tested positive for the virus. This could be used to warn others.

But the two firms had explicitly banned such a function from the start.

Under the terms that all health authorities signed up to use Apple and Google's privacy-centric contact-tracing tech, they had to agree not to collect any location data via the software.

As a result, Apple and Google refused to make the update available for download from their app stores last week and have instead kept the old version live.

As the BBC notes, the NHS app has always included the ability for users to scan a QR code when visiting a public establishment. However, the code was only used to check a database that had been generated by local authorities following a viral outbreak.

The now rejected update would have changed that, by asking users who had tested positive to upload their QR code checks-in to the cloud. A spokesperson for the Department of Health told the BBC that "The deployment of the functionality of the NHS Covid-19 app to enable users to upload their venue history has been delayed."

This is just ridiculously stupid. We can protect health and save lives by making people _use_ this app. And we make them use it by giving strong guarantees that their privacy is protected. If that update went through I’d instantly delete the app from my phone and tell all friends and relatives to do the same. Lives and health would be much better protected by firing Dido Harding instantly.
Score: 33 Votes (Like | Disagree)

gnasher729
“Privacy” is something that UK politicians just don’t understand. And what they understand even less is that Apple and Google could both just say “No” to them.

In this case, the project is run by Dido Harding, known best for almost destroying Talk Talk when they gave hackers access to their customer database and couldn’t see anything wrong with that. So this is not unexpected.
Score: 32 Votes (Like | Disagree)

I do not believe this is that simple.

If we say that health and saving lives is the most important value above everything else, our world should look very different from what it is now. Alcohol and unhealthy food should be banned today, walking 10 000 steps a day should be mandatory, maximum speed limit 20 mph.

Defender2010
The team behind this app are a disaster. First it was months late and now this! Surely someone had the brains to think of this. Millions of ££ wasted on something that other countries out together in a month. Disgraceful waste of tax payers money really. Wonder if the devs owned a bar before and are mates with Hancock.
Score: 20 Votes (Like | Disagree)

And the big "charities" Amnesty International, "civil liberties" outfits, etc. not a single peep from any of them. These so-called rights organizations are nothing more than disingenuous, political special interest groups that when push comes to shove "just follow orders" especially if regular people are oppressed instead of some trendy new scam they're running.
Score: 18 Votes (Like | Disagree)

Hmmm. Mixed results on this one. The NHS also cannot use a custom API so where does this goto now?

They have the choice. Remove their code that spies on my location data, or not have the app on the AppStore or playstore. Up to them.
Score: 14 Votes (Like | Disagree)
Read All Comments