Niantic and Nintendo today announced the upcoming debut of a new augmented reality game based on Nintendo's "Pikmin" franchise, with the title set to launch later in 2021. 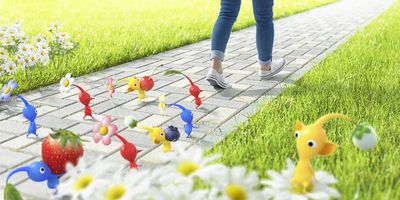 There are few details available about the Pikmin AR game at this time, but Niantic says that it will allow you to "explore the world" alongside Pikmin friends, with a focus on gameplay activities that will "make walking more delightful."

Today, we are thrilled to announce a new partnership with Nintendo to jointly develop mobile titles built on Niantic's real-world AR technology, bringing Nintendo's beloved characters to life in new ways. We're honored that Nintendo has chosen Niantic to be its publisher of real-world AR applications.

To kick off the partnership, Niantic and Nintendo are developing an app based on the Pikmin franchise. The app will include gameplay activities to encourage walking and make walking more delightful. Slated to launch later this year, this will be the first title created by our Tokyo Studio since it was established in April 2018.

Niantic is allowing people to sign up to get more information about the title, and says more details will be available in the coming months.

In a statement, Nintendo's Shigeru Miyamoto said that Niantic's AR tech will make it possible to experience the world as if we're living with Pikmin all around us.

Niantic's AR technology has made it possible for us to experience the world as if Pikmin are secretly living all around us. Based on the theme of making walking fun, our mission is to provide people a new experience that's different from traditional games. We hope that the Pikmin and this app will become a partner in your life.

Niantic developed hit game "Pokémon Go," an augmented reality title where players are tasked with catching Pokémon while out and about. Pokémon Go has remained popular since its 2016 launch, and Niantic has also since come out with "Harry Potter: Wizards Unite." Like Pokémon Go and other Niantic titles, the upcoming Pikmin game will be a mobile title that will presumably be available on iOS and Android devices.

kalafalas
Nothing will ever compare to the Pokémon go summer of 2016. Made so many friends
Score: 10 Votes (Like | Disagree)

Obviously. Yet their business strategy is toxic.

LeadingHeat
Pikmin and Pikmin 2 are hands down one of the best Nintendo games out there. Right up there with Zelda and Mario imo. I’ll instantly be downloading this when it comes out.
Score: 4 Votes (Like | Disagree)

Okay? I don’t understand the want or need to pay for any of that. I had played it everyday since launch up until winter of 2020, never gave Niantic a dime of my own money. It got ridiculous when they started charging for events to get “event exclusive” Pokémon.

So it has a sustainable method of revenue that impacts players the least. I’m just lazy to clean my bag and Pokémons that I’m willing to pay some. It is cheaper than millions of mobile games honestly.
Score: 4 Votes (Like | Disagree)

innovationwho
Pokémon go was good in its first year or two. However this will just be another cash grab for Niantic.
Score: 3 Votes (Like | Disagree)
Read All Comments