Apple CEO Tim Cook is eager for employees to return to the office following the pandemic and in an interview with People, he said he anticipates Apple implementing a "hybrid environment" to return to in-person work. 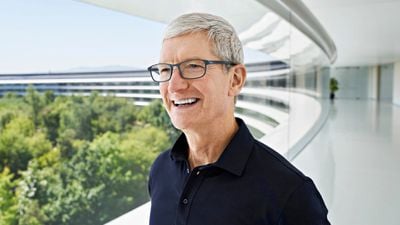 Cook said that it's important for people to "physically be in touch" because you can't plan collaboration and innovation.

"Innovation isn't always a planned activity," Cook adds. "It's bumping into each other over the course of the day and advancing an idea that you just had. And you really need to be together to do that."

Apple has an open floor plan model that's designed to encourage employees to interact with one another, and Cook says that Apple is still "figuring out" how to manage that as people return to work. The time away from the office has, however, taught Apple that some things are "perfectly great" to do virtually.

"We have realized and learned that there are some things that are perfectly great to do virtually across Zoom or WebEx, whatever, or FaceTime, whatever you might have. So I think it'll be, I'll call it a hybrid environment [for] a little bit."

Cook also took the opportunity to point out the work that Apple employees did while working remotely. Cook said that Apple had an "enormous, prolific period" with the introduction of the 5G iPhone 12 lineup and the M1 Macs. "These are major, major accomplishments," he said.

"We're very much an in-person team because we believe that's best for collaboration," Cook told People. "But we knew that was no longer possible, or not possible for this period of time. And so we had to reinvent ourselves."

Cook said that there was no firm return to work date, but he "can't wait" for Apple employees to be back at work.

In addition to commenting on Apple's future plans for employees returning to work, Cook answered a series of quick questions about his daily routine. Cook said that he goes to bed right around 9:30 p.m., and wakes up at 4:00 a.m. He opens up Apple News first thing in the morning, and coffee and his iPhone are two things he can't live without.

Cook said that he recently "binged" Apple TV+ series "Ted Lasso," and that strength training is his favorite workout. Cook also said that he last FaceTimed his nephew, his favorite emoji is the peace sign emoji (✌️) and that he hopes to take a trip to Glacier National Park in the future.

bklement
Open floor offices are among the greatest mistakes managers every came up with.
Score: 29 Votes (Like | Disagree)

blazerunner
Working from home has been a blessing; no need to waste time in traffic, no need to waste money on gas, no need to use gas and pollute environment, no need to be around ******* coworkers (I was stuck with a bunch of close minded 50+ year old indian men that refused to speak english around me, even when i joined them for lunch)...

Yeesh. As a developer who works remotely, I can't fathom how people think this is still a good idea.
Score: 21 Votes (Like | Disagree)

phobos512
Translation: They have a giant empty campus they're paying for that they need to extract some value from.

I personally would be happy never returning to the office. I have been to my office three times in the last year. I manage a remote team of contractors anyway. I can do that from anywhere on Earth.
Score: 18 Votes (Like | Disagree)

munpip214
Apple Employees 'Can’t Wait' to Return to In-Person Work as long as they can do it at home.
Score: 14 Votes (Like | Disagree)

Yeah I mean who wants to meet people? Who wants to move their body all day to chat to people? Who needs social etiquette or dress well in public? Lunch with colleagues? We should remain at home all the time with no physical contact until we die from mental health problems. Loneliness is so cool. Am sure some Silicon Valley VCs have plans to exploit and monetize your life without a social circle. ???

We are created to be social beings. We can emulate all the things we need, but nothing can match the real thing. I like the idea of creating more flexibility and have a less rigid onsite policy. I am in favor of set days people come in to foster the positive elements he is endorsing.