Apple today updated its privacy website with a new "Labels" section that brings privacy labels for all of Apple's apps together in one place, making it easier for users to learn about how Apple apps handle their personal data. 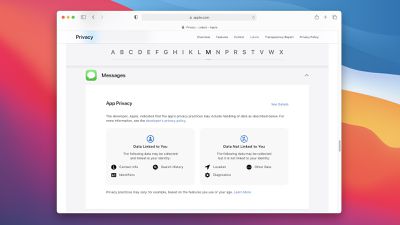 Apple already provided privacy labels for its apps since the feature launched last year, but on individual support pages, so this new "Labels" section makes it easier to view the labels all in one place, and in alphabetical order. Privacy labels are available for Apple's apps across iOS, iPadOS, macOS, watchOS, and tvOS, so some apps like GarageBand appear more than once. Apple has also included labels for developer tools like Xcode and even the App Store itself, providing a very comprehensive level of privacy information.

Apple emphasizes that users will not find any data under "Data Used to Track You" for its apps, as Apple does not track users. Apple says it holds itself to a higher standard than it does for all other developers, who will be permitted to track users if they obtain their permission via the App Tracking Transparency framework that will be enforced as of iOS 14.5.

Apple introduced privacy labels on the App Store in December, providing users with a broad overview of the data types an app may collect, and whether the information is used to track them or is linked to their identity or device. These labels appear in App Store listings for third-party apps and downloadable Apple apps like Apple Podcasts, while built-in apps that cannot be removed like Messages have labels on Apple's website.

Apple has required developers to fill out the privacy labels when submitting new apps and app updates to the App Store since early December, but the labels function on an honor system. Apple previously said it "conducts routine and ongoing audits of the information provided" and works with developers to correct any inaccuracies, adding that apps that fail to come into compliance may ultimately face removal from the App Store.

SDJim
Whiny-ass, personal-data-stealing companies: "Apple is making us fess up on our apps privacy practices, why don't they have to?!!"
Apple: "You want me to make you look bad? Have it your way."
Score: 15 Votes (Like | Disagree)

RickDEGH
Day by day making the writing of my thesis on privacy easier.
Score: 14 Votes (Like | Disagree)

TheYayAreaLiving ?
Summary of Apple's performance in 2021.

macintoshmac
This is very good. One place to check all Apple apps. Individuals, researchers, press, everyone can benefit from one-stop view.
Score: 8 Votes (Like | Disagree)

Or at least pretending to. Who's to audit Apple? Could this be another marketing blitz to cover up the truth, like Apple is so famous for? I don't know.

sounds like a too tight fit on the tin foil hat. Could you please document the conspiracy theory with, I don't know, actual fact? thanks, a big help
Score: 8 Votes (Like | Disagree)

Tofupunch
I'm still not clear on what these labels actually mean. For example, if it says "Data Used to Track You" and purchases are included, are they tracking purchases made in the particular app or somehow vacuuming up any and all purchases made online? Is there a link or reference that can provide more clarity?
Score: 7 Votes (Like | Disagree)
Read All Comments

Thursday April 8, 2021 4:19 am PDT by Tim Hardwick
Facebook is testing the use of Page labels as a way to give people more context about the posts that appear in their news feed, the social network has announced. Politicians' pages will be marked with the label "public official," while the labels "fan page" and "satire page" will be applied to posts from the relevant pages, with the aim of helping users to distinguish between genuine news...
Read Full Article • 28 comments