Apple is working on MagSafe-compatible battery packs that will be compatible with the iPhone 12 models, and leaker Jon Prosser today said on the Genius Bar podcast that one version of the battery pack will feature "reverse charging." 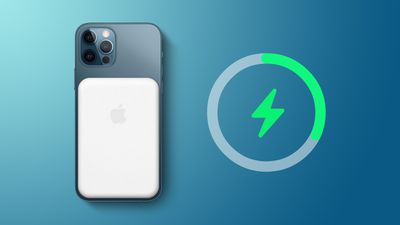 Prosser has a mixed track record when it comes to predicting Apple's plans and is not always accurate, so the reliability of this information is unclear and should be viewed with some skepticism until confirmed. Prosser claims that his source is "not sure" if Apple will release both of these battery packs or if only one will launch, so we may not see a version with reverse charging debut. Later this week, Prosser plans to release renders of the battery packs based on information from his source.

Apple's work on ‌iPhone 12‌ battery packs became apparent in mid-February after the launch of the second iOS 14.5 beta. There was a mention of a mysterious "battery pack" discovered in the code by MacRumors contributor Steve Moser, and Bloomberg later confirmed that Apple is indeed working on an ‌iPhone 12‌ MagSafe battery pack.

Gurman did not mention a reverse charging possibility, but some of the prototypes were described as having a white rubber exterior. Gurman said that development on the accessory has been hindered by software issues that Apple is still working on fixing before releasing the accessory.

Bilateral wireless charging was rumored for the 2019 iPhone 11 models, but it did not end up being a feature that Apple implemented because the company wasn't able to make it work. Two way wireless charging would have allowed an iPhone to charge another ‌iPhone‌ or to charge a small accessory like the AirPods.

cmaier
Why does phone charging the pack not make sense? That way you’d just plug the phone in and it would charge the pack. Saves a connector on the pack.
Score: 14 Votes (Like | Disagree)

Ted Lasso
Now this would make MagSafe useful for me. I’d buy that.
Score: 9 Votes (Like | Disagree)

HeavenDynamic
I find it kinda funny that all those "leakers" publish their reports right after Gurman's and Kuo's. Never before.
Score: 9 Votes (Like | Disagree)

thealkimist
Wireless charging via electrical socket seems acceptable to me. But via a battery? That feels more wasteful with its inefficiency.
Score: 8 Votes (Like | Disagree)

flopticalcube
More likely is that it means the battery pack can be charged from a magsafe charger. Some 3rd party MS batteries can already do this.
Score: 7 Votes (Like | Disagree)
Read All Comments

Thursday June 3, 2021 9:44 pm PDT by Juli Clover
Apple is developing a new iPad Pro that will feature wireless charging capabilities, reports Bloomberg. The upcoming iPad Pro will debut in 2022, following the updated M1 11 and 12.9-inch iPad Pro models that launched in May 2021. For the new iPad Pro, Apple is testing a glass back instead of an aluminum enclosure, which would allow for the wireless charging capabilities. Apple first...
Read Full Article • 109 comments

Friday February 19, 2021 3:37 am PST by Tim Hardwick
Apple is working on a magnetic battery pack attachment for iPhone 12, according to a new report from Bloomberg's Mark Gurman. Apple has been developing the attachment for at least a year and it has been scheduled to launch in the months following the release of the iPhone 12 line, according to people with knowledge of the product. The iPhone 12 models were introduced in October. The battery ...
Read Full Article • 46 comments

Thursday June 3, 2021 10:04 pm PDT by Juli Clover
Apple is continuing to work on a future wireless charger that would function similarly to the now-abandoned AirPower, according to Bloomberg's Mark Gurman. In a report outlining Apple's wireless charging ambitions, Gurman says that Apple is "still exploring" a wireless charger that would charge multiple devices like an iPhone, Apple Watch, and AirPods all at once. Apple first announced...
Read Full Article • 69 comments

Friday February 19, 2021 1:26 pm PST by Eric Slivka
Shares of Energous, a company developing long-range RF-based charging technology under the name "WattUp," nearly doubled today, apparently driven by a Bloomberg report this morning indicating that Apple has been working on a MagSafe battery pack for its iPhone 12 lineup. The story was kicked off earlier this week when MacRumors contributor Steve Moser discovered a non-specific reference to an...
Read Full Article • 46 comments

macOS 11.3 Could Ensure Your Mac is Fully Charged in Time for Calendar Events

Thursday February 18, 2021 9:05 am PST by Joe Rossignol
Apple appears to be planning a meeting-friendly improvement to its Optimized Battery Charging feature on the Mac in macOS 11.3. New code in the second beta of macOS 11.3, discovered by MacRumors contributor Steve Moser, suggests that the upcoming software update will ensure a Mac is fully charged to 100% prior to a scheduled calendar event, such as a meeting. macOS 11.3 will ensure that a ...
Read Full Article • 44 comments