Apple co-founder and former CEO Steve Jobs was born on February 24, 1955, and if he was still alive, today would mark his 66th birthday. 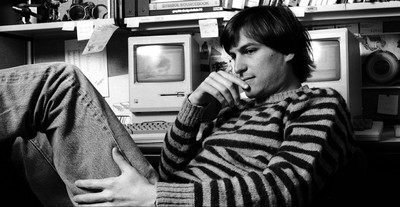 Jobs founded Apple alongside Steve Wozniak in 1976, producing the very first Apple computers, but he also served as CEO during a pivotal period and was largely responsible for the company's wild success with products like the iPhone and the iPod.

Under Jobs' leadership from 1997 until his 2011 death from cancer, Apple went from a company on the brink of failure to one of the biggest tech companies thanks to the launch of the 1998 iMac and the well known "Think different" ad campaign.

The 1998 ‌iMac‌ was followed by a slew of other successful products, including the ‌iPhone‌, iPod, and iPad along with the iTunes Store. Jobs also oversaw the opening of the first Apple retail locations in 2001, and he established a company culture that Apple still operates under today.

As Apple CEO Tim Cook has said multiple times in the past, Jobs' thinking, unwavering perfectionism, dedication to hard work, and lust for innovation are the "foundation of Apple."

Millions of lives have been touched by Apple devices, and there are few technology products on the market that have not been influenced by Apple and Steve Jobs in some way, even today. ‌Tim Cook‌ has since taken over for Steve Jobs, and has kept Jobs' legacy alive.

Apple fans around the world will celebrate Steve Jobs and his accomplishments today, and ‌Tim Cook‌ as always has tweeted in memory of Jobs' birthday.

Celebrating Steve on what would have been his 66th birthday. Especially in a year where so much kept us apart, technology brought us together in limitless ways. That’s a testament to Steve’s life and the legacy he left, which continue to inspire me every day. pic.twitter.com/4nluynVjFF — Tim Cook (@tim_cook) February 24, 2021

MacRumors also happens to share a birthday with Steve Jobs, and as of today, the site is turning 21. MacRumors was founded on February 24, 2000 by Arnold Kim, and what started out as a side project has grown right alongside Apple into the number one Apple news site on the web.

We're grateful to all of our dedicated readers, passionate community members, and volunteers, and we look forward to bringing you Apple news and rumors for the next 21 years. 🥂

adamjackson
While there aren't too many Macrumors these days, I'm still glad this site is around. They outlived every other early 2000s rumor site in editorial and community. The fact we have a 'Mac forum' not in Facebook or Reddit is fantastic. Us old-geezers still get to talk with other Mac users on an independently ran site.
Score: 38 Votes (Like | Disagree)

ArPe
Happiest birthday Steve I wish you were still around so we could have someone to smack the scamming conmen Zuckerberg/Musk/Dorsey upside the head. This trinity of tech leaders today is poison.
Score: 23 Votes (Like | Disagree)

While there aren't too many Macrumors these days, I'm still glad this site is around. They outlived every other early 2000s rumor site in editorial and community. The fact we have a 'Mac forum' not in Facebook or Reddit is fantastic. Us old-geezers still get to talk with other Mac users on an independently ran site.

I'm proud we've survived and grown since early 2000s. The Mac-web is very different today than it was when we started. There used to be a lot of smaller Mac/Apple-sites around, but I guess there's been consolidation over the years with the smaller publications being unable to survive.
Score: 21 Votes (Like | Disagree)

MozMan68
Happy Birthday MacRumors....at least we can now have a drink together...
Score: 19 Votes (Like | Disagree)

But also, it's a shame Jobs didn't believe in modern medicine until it was too late.
That homeopathic BS certainly didn't help his fight against an already gloomy diagnosis.
If he had taken aggressive surgical steps at the very beginning as well as all the other standard protocols, it doesn't mean he would have survived, but my ex got 3 more years after being given 6 weeks to live. Jobs took an intellectual fight to a caged knife fight.
Score: 10 Votes (Like | Disagree)
Read All Comments

Steve Jobs to Be Memorialized in National Garden of American Heroes

Tuesday January 19, 2021 1:49 am PST by Tim Hardwick
Steve Jobs is to be memorialized in the National Garden of American Heroes, after his name appeared along with hundreds of other notable figures in an executive order signed by outgoing U.S. President Donald Trump. According to the order, signed on Monday, the garden will be built in honor of "legends of America's past," and Jobs will be honored with a statue to commemorate his life and...
Read Full Article • 4 comments

Monday October 5, 2020 2:55 am PDT by Tim Hardwick
Nine years ago today, Steve Jobs passed away from pancreatic cancer at the age of 56, one day after Apple executives introduced the iPhone 4s at a media event on the company's Infinite Loop headquarters campus. In the days following his passing, Apple started posting comments from fans on its "Remembering Steve" webpage. Apple continues to maintain the page highlighting a few of the over one ...
Read Full Article • 161 comments

Tuesday February 9, 2021 3:24 am PST by Tim Hardwick
Bloomberg has published an in-depth piece by journalists Austin Carr and Mark Gurman about the rise of Apple under Tim Cook's leadership, covering several attributes of the CEO that took over from Steve Jobs, including his diplomatic acumen, operational prowess, eye for detail, and manifest success in making Apple one of the biggest companies in the history of modern business. The story...
Read Full Article • 82 comments

Tuesday March 30, 2021 1:48 am PDT by Tim Hardwick
Apple has lost a legal bid to block Swatch from registering Steve Jobs' famous "One more thing" saying as a trademark in the UK, reports The Telegraph. Apple argued that the Swiss watchmaker had trademarked the slogan in "bad faith," as it has been associated with Apple for more than 20 years. The late Steve Jobs often used the phrase to announce new products at the end of Apple...
Read Full Article • 74 comments

Monday August 24, 2020 1:13 pm PDT by Joe Rossignol
Nine years ago today, on August 24, 2011, Steve Jobs stepped down as Apple CEO for the final time. Jobs was immediately named Apple's chairman, with then-COO Tim Cook taking over leadership of the company. Jobs sadly passed away just six weeks later, on October 5, one day after Apple introduced the iPhone 4s with Siri. He was 56. His death resulted in an outpouring of condolences from...
Read Full Article • 105 comments