Google today quietly added App Privacy labels to its Gmail app, marking the first of its major apps to receive the privacy details aside from YouTube. 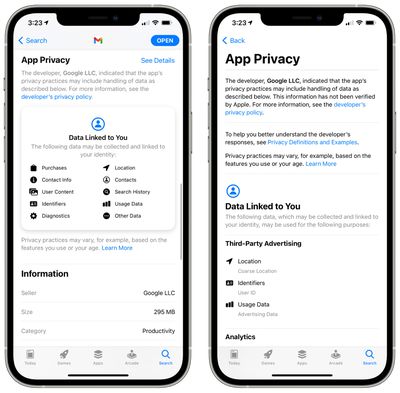 Though App Privacy information has been added to Gmail, Google has done so server side and has yet to issue an update to the Gmail app. It has been two months since the Gmail app last saw an update.

Earlier in February, the Gmail app was displaying warnings about the app being out of date as it has been so long since new security features were added, but Google eliminated that messaging without pushing an update to the app.

Apple has been enforcing App Privacy labels since December, and Google has been slow to support the feature. Google said in early January that it would add privacy data to its app catalog "this week or next week," but by January 20, most apps still had not been updated with the App Privacy.

Google has since been adding App Privacy labels to apps like YouTube and some of its smaller apps, but of major apps like Google Search, Google Photos, and Google Maps, Gmail is the first to get the new labeling.

Though most Google apps went months without an update and still have yet to be updated, apps like Google Translate, Google Tasks, YouTube Music, and YouTube TV have been updated with new content and bug fixes. These apps were quietly updated with App Privacy labels prior to when their content was updated, however.

Now that Gmail has App Privacy labels in place, we may soon see the information made available for other Google apps, and Google may resume the regular updates that were offered for iOS apps prior to when Apple implemented the new rules.

icanhazmac
As stated in the article, no real surprises but it is different when you see it in writing... scumbags.
Score: 14 Votes (Like | Disagree)

Baritone_Guy
Some of these are still too vague. For example: Purchases. Purchases from where? Are they mining email to look for receipts? I suspect the answer is yes, but these labels need more granularity.
Score: 12 Votes (Like | Disagree)

_Spinn_
About time. Isn't that pretty much all of the options selected? Looks pretty much like how I expected it to.
Score: 11 Votes (Like | Disagree)

Nicky G
Why an email app needs to be tracking your location is a bit beyond me. Oh yeah, Google hawks that data, which essentially means any third party can know where you are any time, and Google makes $$$ from it. Sketchy.

There needs to be gov regulation making this kind of thing totally illegal IMHO. No reason online ads tracking the location of Americans behind their backs should even be a thing, at all. We let this get way out of hand and it needs to be reigned in ENTIRELY. As in, made totally illegal. Location tracking should be tied to product features only, and should be totally anonymous from the developer's perspective. This garbage is ridiculous.
Score: 11 Votes (Like | Disagree)
Read All Comments