In an interview with He Shijie, a senior at the Beijing University of Posts and Telecommunications, Apple CEO Tim Cook called 2020 Apple's "top year of innovation ever." 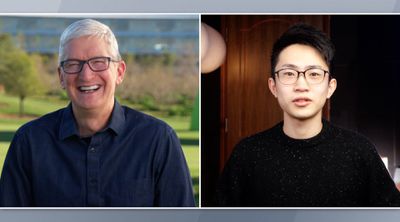 In 2020, Apple released a number of new products, ranging from the iPhone 12 lineup, to brand new iPads, the Apple Watch Series 6 and SE, and of course, new Apple Silicon Macs. Putting all of that together, ‌Tim Cook‌ says Apple innovated in 2020 more than any other year, but notes that "there's no formula for innovation."

Shijie asked Cook about the stress, and process that Apple goes through to release new products every year. The CEO says it's enabled largely by putting people with diverse skills, backgrounds, and passions together, allowing them to do their lives' best work, and that "one plus one has always been more than two at Apple."

What we do is we have a culture of creativity and a culture of collaboration. And these two things together, when they intersect, create enormous innovation. You put people together that have different skills, that look at the world differently, maybe they're from different places, they have different backgrounds. Some are hardware, some are software. Some are services. Some may be musicians and artists. But you put them all together on a common purpose, to design an incredible product, and it is amazing what can come out of it.

On the new ‌iPhone 12‌ lineup, Cook says Apple's having "an incredible time with it," reiterating comments he made at the company's latest earnings call. Regarding the new ‌Apple Silicon‌ Macs, Cook called the performance of the M1 chip "jaw-dropping," and that "it screams. It's so fast."

Apple's business in China continues to be a backbone for the company. In Q4 of 2020, ‌iPhone 12‌ sales in the country hit 18 million units, and ‌Tim Cook‌ called the response "phenomenal" earlier last month. Shijie, living in China, asked Cook about whether there are features that are based on customers' feedback from China. Cook named a few, including iOS 13 dark mode, QR readers, specific keyboards, and 5G.

There's a ton of features there that are. Whether it's specific keyboards, whether it's QR Code mode. 5G in a lot of ways was energized in China because China is so far ahead in the coverage model for 5G. Junction view in Maps because of the complex intersections and so forth. Night mode was another one where the inspiration for Night Mode came from China. And so we listen very carefully to our customers there and wind up creating things based on that, that is then given to the world. We get a lot of feedback from China.

Shijie also brought up the subject of his grandmother, who he notes is having a hard time learning how to use an iPhone. He asks Cook what Apple can do to "give wings to the elderly and to the digital world."

Well, we try really hard to design our products for everyone. And we try very hard to design the product like the mind works, so you don't have to have an instruction manual, you can pick it up and it works the way that you would think it would work. We have classes in Apple Retail, where we'd love to train your grandmother on using her iPhone right there in the class. And we have telephone support and so forth for people that need that. But our hope is and our desire is always to design the product in such a way that it works as you would expect it to do, so that no instruction is needed.

The remainder of the interview covers topics such as Cook's past trips to China and his love for interacting with people, the importance of education and expanding access to it around the world, and advice for people who are still seeking to find the job they love. You can watch the interview with English and Chinese subtitles here.

Most Mac Users don't care about performance. PowerPC was slow as hell and people did not care.

Everybody cares about performance. PowerPC was faster than Intel, until it wasn't.
Score: 20 Votes (Like | Disagree)

No "new products" like those years, but the M1 has totally resuscitated the Mac. Let's be honest, Apple stopped caring about the Mac but now the Mac is exciting again and I can't wait for more innovation.
Score: 17 Votes (Like | Disagree)

Seanm87
Seems strange that he claims it was Chinese customers that asked for dark mode. Im pretty sure it was universally wanted.
Score: 11 Votes (Like | Disagree)

yegon
Iteration is the new innovation it seems.
Score: 11 Votes (Like | Disagree)

Feyl
Is this guy for real or did he lose it? Tim should take a reality check and stop using such strong words. I mean, creating a whole new categories like iMac, iPod, iPhone, iPad is a less significant breakthrough than a phone with sharp edges and 5G?
Score: 11 Votes (Like | Disagree)
Read All Comments