A new Apple patent published today by the U.S. Patent and Trademark Office describes an iPhone display that, with high refresh mode enabled, may be capable of updating content at two times, three times, or even four times the native refresh rate, as reported by Patently Apple. For example, an ‌iPhone‌ with a 60Hz display would be able to increase its variable refresh rate to 120Hz, 180Hz, or 240Hz automatically. 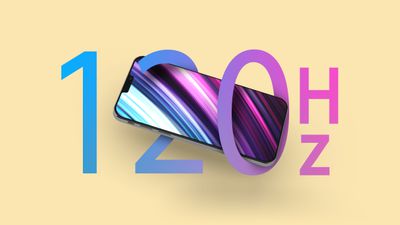 For those unfamiliar, refresh rate refers to how many times a display refreshes every second. (The higher the refresh rate, the smoother the content on the display will be.) All current iPhones have a refresh rate of 60Hz, but since 2017, all iPad Pro models have featured ProMotion technology, enabling a variable refresh rate of up to 120Hz.

Rumors of 120Hz coming to the iPhone 12 proved to be untrue, but there is renewed confidence that ProMotion will make an appearance on the iPhone 13. During the rumor cycle last year, some claimed that the ‌iPhone 12‌ would automatically switch between 60Hz and 120Hz depending on what the user was doing on their device in an effort to preserve battery life. While the ability for a device to switch between 60Hz and 120Hz is not new, the patent describing the ability for an ‌iPhone‌ to push the refresh rate to as high as 180Hz or 240Hz is.

The lack of a 120Hz refresh rate on the ‌iPhone‌ so far could be linked to the fact that Apple tends to treads carefully when adding features such as ProMotion that could be detrimental to battery life or systemwide performance. Rumors suggest that Apple will overcome this power consumption dilemma by adopting low-power LTPO display technology for iPhone 13 models, allowing for 120Hz without a significant impact on battery life.

A higher refresh rate could be beneficial for several use cases, such as gaming and augmented reality. If a user is simply watching a movie or messaging a friend, the display could switch back to its 60Hz native refresh rate as a means to save battery life.

This week, new rumors claimed that alongside a 120Hz refresh rate, the ‌iPhone 13‌ lineup will also have an always-on-display. Always-on displays allow users to see certain information, such as the time, date, or battery life, at all times. All high-end iPhones since the ‌iPhone‌ X have featured OLED displays, meaning each pixel is individually controlled, allowing the device to only light up the pixels needed to show users limited information, preserving battery life.

My guess is this would function similar to Auto 5G - switching to 240hz only when it really needed it (to conserve battery), and switching back to 120hz or 60hz even if not needed. Maybe even lower than 60hz if they implement an AOD.

My Samsung phone currently runes at 120hz and it is notable if I change it back down the 60hz. Smooth as butter
Score: 9 Votes (Like | Disagree)

cmaier
The patent really is not focussed on “240Hz.” The claims are more general than that. 240Hz is just one example (there are a couple dependent claims that refer to 120Hz and 240Hz, just because those are obviously natural choices given the ”2x” limitation):

My guess is this would function similar to Auto 5G - switching to 240hz only when it really needed it (to conserve battery), and switching back to 120hz or 60hz even if not needed. Maybe even lower than 60hz if they implement an AOD.
Score: 6 Votes (Like | Disagree)

Anson_431
In a sense, I do like how Apple either doesn't do it, or do it and go full bonkers and overkill when they decided to go for it ?
(And yes, I know. It's just a patent at this point?)
Score: 5 Votes (Like | Disagree)

tell us about the battery difference between the two

My battery can last 2 days with moderate to heavy use.
Score: 5 Votes (Like | Disagree)

Battery life this battery life that. I still want to know why Apple is so obsessed with making a phone thin that they ignore the 99% of the world who would rather it be a little thicker with better features and battery life.

If that was the case, those people would buy phones that were designed that way. Maybe Apple has a firmer grasp on what 99% of the world wants than you do?
Score: 3 Votes (Like | Disagree)
Read All Comments