Google today announced that it will be expanding Google Fi's built-in VPN service to the iPhone starting this spring, providing iOS users with another option to ensure that their connection is secure and private on a cellular or Wi-Fi network. Google also said the VPN is exiting beta for Android smartphone users. 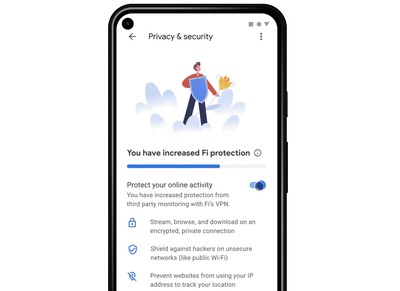 With the VPN, users can stream, browse, and download on an encrypted, private connection, which is especially important for unsecured public Wi-Fi. VPNs also prevent websites from tracking a user's location by masking their IP address.

Google Fi, formerly Project Fi, is an MNVO or "virtual carrier" that piggybacks off the T-Mobile and U.S. Cellular networks in the United States, providing users with talk, text, and data plans with more flexible pricing options. Last year, Google Fi rolled out eSIM support for some iPhone users, allowing it to be used as a secondary line.

DinkThifferent
Will the VPN from Google be as private and secure as the VPN from Facebook ('https://www.engadget.com/2019-02-22-facebook-shuts-down-onavo-android.html?guccounter=1&guce_referrer=aHR0cHM6Ly9kdWNrZHVja2dvLmNvbS8&guce_referrer_sig=AQAAAIBFw8cLAycfLR0N8KpLGUNE8YuRUysfO1Q6b_kDYdL-DrAfAvuDaS0mcxhMjgJfoLTMaZmBb-rMvYMIa-k9_FBCT3fuL4jLm4qszpoD_a-FDXl_LZyR6QD1OG7XC7BniaVGk3HEejZnfi-SkngRJD5K8jlXuEm3ADDkwogDL5d5')?
Score: 18 Votes (Like | Disagree)

IllinoisCorn
I don't think I would trust a Google VPN.
Score: 12 Votes (Like | Disagree)

dlopan
NO. Google is not to be trusted in way shape or form. Do lots of wrong
Score: 9 Votes (Like | Disagree)

Theyayarealivin
I hope Google has updated their privacy for Google Fi’.
Score: 7 Votes (Like | Disagree)
Read All Comments