Apple plans to release second-generation AirPods Pro within the first half of 2021, according to unnamed industry sources cited by Taiwanese publication DigiTimes in a report focused on flash memory supplier Winbond. 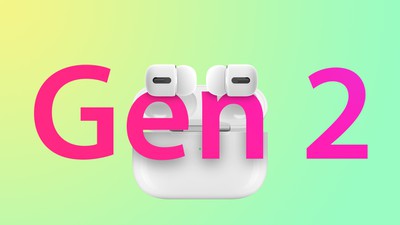 Winbond is also expected to be among the NOR flash suppliers for Apple's next-generation AirPods Pro slated for launch later in the first half of this year, the sources indicated. The Taiwan-based chipmaker will be running its NOR flash production lines at nearly full capacity utilization during the six-month period.

This follows a report from Japanese blog Mac Otakara that claimed the new AirPods Pro will be released in April alongside a third-generation iPhone SE. That report did not offer any details about the new AirPods Pro beyond claiming that the wireless charging case will have slightly tweaked dimensions compared to the original.

Bloomberg's Mark Gurman has previously reported that Apple is aiming to make the AirPods Pro more compact by eliminating the stem that sticks out from the bottom of the earphones, but it's unclear if Apple will achieve this feat. Gurman said Apple had a design in testing with a rounder shape that fills more of the ear, similar to Google's Pixel Buds or Samsung's Galaxy Buds. That report likewise mentioned a 2021 release date.

Introduced in November 2019, the current AirPods Pro feature an in-ear design with three sizes of soft, flexible silicone tips included in the box, along with shorter stems below the ear. AirPods Pro have several upgraded features over regular AirPods, including active noise cancellation, improved sound quality, and water and sweat resistance.

I cannot use the first generation AirPod Pro's as I am one of the unfortunate individuals allergic to the silicone they use. I have passed them on to others and every person has had the same irritation or reaction. I have gone back to my original all plastic AirPods which are good enough.

You can always buy replacement tips from a third party. Check out Comply foam tips for the AirPod Pro. Comply has been around, and many swear by them.
Score: 10 Votes (Like | Disagree)

dantracht
Not sure how I feel about eliminating the stem, I have trouble getting them out of the case to put them in my ear as it is. I find the stem helpful.
Score: 6 Votes (Like | Disagree)

jerryk
Sounds good. Now make them in some other color than white so they do not stand out. I prefer black.
Score: 5 Votes (Like | Disagree)

I cannot use the first generation AirPod Pro's as I am one of the unfortunate individuals allergic to the silicone they use. I have passed them on to others and every person has had the same irritation or reaction. I have gone back to my original all plastic AirPods which are good enough.

Comply make foam tip replacements for the AirPod Pros. They fit great both in my ear and in the case.

ETA: Ninja'ed but here's another vote for Comply. Stay away from any of the cheap Chinese ones on Amazon.
Score: 4 Votes (Like | Disagree)

Sounds good. Now make them in some other color than white so they do not stand out. I prefer black.

Yes but please make the stem longer, so that you can use them for phone calls.

Bloomberg's Mark Gurman has previously reported that Apple is aiming to make the AirPods Pro more compact ('https://www.macrumors.com/2020/10/26/apple-new-airpods-2020-third-homepod/') by eliminating the stem that sticks out from the bottom of the earphones

lol. I don’t think the stem will be getting longer. But I do
believe that the AirPods Pro are more than good enough for phone calls. In fact they have one of the best mics compared to it’s competitors.
Score: 3 Votes (Like | Disagree)
Read All Comments

Friday May 14, 2021 11:52 am PDT by Juli Clover
Following the discontinuation of the iMac Pro, Apple also appears to be discontinuing Space Gray "Magic" accessories that it sold separately alongside the iMac Pro. The iMac Pro was the only Space Gray Mac, and Apple designed special matching accessories for it. The Space Gray Magic Mouse 2, Magic Keyboard, and Magic Trackpad all now say "While supplies last" in small wording at the bottom...
Read Full Article • 340 comments