The Apple Watch Series 7 will reportedly feature blood glucose monitoring via an optical sensor, according to ETNews. 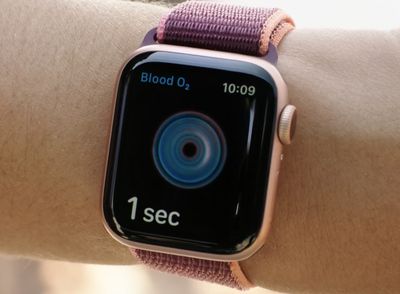 The report, which mainly focuses on the blood glucose capabilities of the Samsung Galaxy Watch 4, explains that Apple is intending to bring blood glucose monitoring to the upcoming Apple Watch Series 7 using a non-invasive optical sensor.

Apple is said to have secured patents around blood glucose monitoring, and the company is now purportedly "focusing on securing reliability and stability prior to commercialization of the technology." The Apple-designed optical sensor is believed to be a skin-top continuous monitoring solution that does not require an implant.

Rumors suggest that Apple has been interested in adding blood glucose monitoring to the Apple Watch for some time. The company reportedly established a team of biomedical engineers and consultants specifically working on sensors for non-invasively monitoring blood sugar levels in 2017, and work on the sensor reportedly progressed to trials at clinical sites in the San Francisco Bay Area. Apple CEO Tim Cook has even been spotted testing what was believed to be a prototype glucose monitor connected to his Apple Watch.

Apple has added new health-oriented features to the Apple Watch in recent years, such as the ability to measure blood oxygen levels or take an ECG. Late last year, ‌Tim Cook‌ teased the future of the Apple Watch, saying that the device is still "in the early innings," with Apple testing "mind blowing" capabilities in its labs. "Think about the amount of sensors in your car," said Cook, adding "and arguably, your body is much more important than your car."

moabal
That would be the holy grail of smart watch features.

Why would someone want to prick for blood when they can just buy an Apple Watch?

It would also be good for those with increased risk.
Score: 64 Votes (Like | Disagree)

Geepaw
If Apple can pull this off it's a game changer for the Apple Watch. It goes from being a nice accessory that has cool features to an essential health item for a great many people.
Score: 49 Votes (Like | Disagree)

Supermacguy
I hope this works, my wife it Type 1, and even the "medical grade" insertable/under skin sensors give wrong readings on a regular basis. Tho I don't have a lot of hope that over-the-skin can possibly be more accurate or more reliable.
Score: 28 Votes (Like | Disagree)

Duncan-UK
Not interested in upgrading from my S6 unless it contains the ability to give me 15 minutes of invisibility per day...
Score: 20 Votes (Like | Disagree)

MrMacintoshIII
If this happens, it solidifies the idea that one NEEDS to buy and sell their Apple Watch every year or two at maximum. There’s simply too much gained between each generation... it’s still like the early years of iPhone model upgrades.

Each upgrade compounds the usefulness of the watch exponentially.
Score: 15 Votes (Like | Disagree)

How about bring out ECG options to Australia first??

How about you take it up with the Australian health officials first. Not an Apple issue.
Score: 15 Votes (Like | Disagree)
Read All Comments