Apple has committed to financing and producing "Kitbag," an epic film directed by Ridley Scott that will star Joaquin Phoenix as French emperor and military leader Napoleon, according to Deadline. Phoenix is well known for his Oscar-winning performance as "Joker" in 2019, and he also played Roman emperor Commodus in Scott's epic film "Gladiator" in 2000. Production of the film is expected to begin in early 2022. 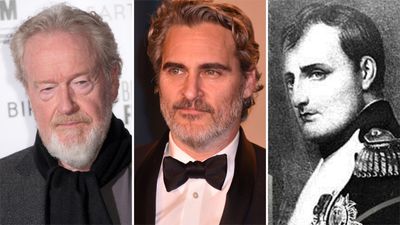 "Napoleon is a man I've always been fascinated by," Scott told Deadline. "He came out of nowhere to rule everything — but all the while he was waging a romantic war with his adulterous wife Josephine. He conquered the world to try to win her love, and when he couldn't, he conquered it to destroy her, and destroyed himself in the process."

"No actor could ever embody Napoleon like Joaquin," added Scott. "He created one of movie history's most complex Emperors in Gladiator, and we'll create another with his Napoleon. It's a brilliant script written by David Scarpa, and today there's no better partner than Apple to bring a story like this to a global audience."

"Kitbag" is one of several upcoming films coming to Apple TV+. A drama film "Palmer" starring Justin Timberlake is set to debut January 29, and an action-thriller film "Emancipation" starring Will Smith is in the early stages of development.

Joker sucked. I'm not impressed at all.

So you’re going to throw away the rest of the man’s career? Makes sense.

Joker was a dreadful film, but Phoenix is a brilliant actor.
Score: 7 Votes (Like | Disagree)

Joker sucked. I'm not impressed at all.

While I wouldn't go as far and say Joker sucked, it is certainly very overrated -- largely predictable and mostly a series of character development rather than developing a story into a major payoff.

What is not overrated is Joaquin Phoenix's performance. He is just riveting to watch.

Moreover, Ridley Scott had nothing to do with Joker. His action oriented story telling has potentials to be effective for the subject matter, Napoleon. There hasn't been much films or TV series about Napoleon, at least not recently.
Score: 7 Votes (Like | Disagree)

ghanwani
He's too tall for the role.
Score: 6 Votes (Like | Disagree)

Gladiator was great. Expect it to be more like that.

Gladiator was extremely great, and so is anything made by Mr. Scott. However, the Bonaparte story is way more complicated.
Score: 6 Votes (Like | Disagree)

timber
All about this project is interesting but this part makes anyone cringe.

He conquered the world to try to win her love, and when he couldn't, he conquered it to destroy her, and destroyed himself in the process.

name99
No
"Note: Due to the political or social nature of the discussion regarding this topic, the discussion thread is located in our Political News ('https://forums.macrumors.com/forums/political-news.218/') forum."
?

Poor Napoleon. One hundred and fifty years ago this would have been a third-rail issue, with everyone having a strong opinion!
Sic transit gloria mundi.
Score: 5 Votes (Like | Disagree)
Read All Comments

Thursday February 17, 2022 7:54 pm PST by Juli Clover
Apple today shared a short movie called "Life is But a Dream," which was created by South Korean film director Park Chan-wook, who is known for "Oldboy," "The Handmaiden," "Lady Vengeance," and more. The 21 minute film was commissioned by Apple, and it tells the story of an undertaker who needs wood to build a coffin for the savior of his village. He digs up an abandoned grave, awakening the ...
Read Full Article • 48 comments

Monday August 30, 2021 11:44 am PDT by Juli Clover
Apple has inked a deal for "Raymond and Ray," an upcoming movie that's set to star Ewan McGregor and Ethan Hawke. The film is about two half brothers who have lived together in the shadow of their father, but still have a sense of humor. After their father dies, they have a chance to reinvent themselves."Raymond and Ray" follows half-brothers Raymond (played by Ewan McGregor) and Ray (played ...
Read Full Article • 45 comments

Monday August 23, 2021 11:11 am PDT by Juli Clover
Upcoming Apple TV+ movie "The Tragedy of Macbeth" is set to premiere at the BFI London Film Festival on the final day of the event, Sunday, October 17. Apple also plans to offer preview screenings of the film at London Film Festival partner cinemas across the UK. Written by Joel Coen, "The Tragedy of Macbeth" is set to star Denzel Washington and Frances McDormand. Filmed entirely in black ...
Read Full Article • 29 comments