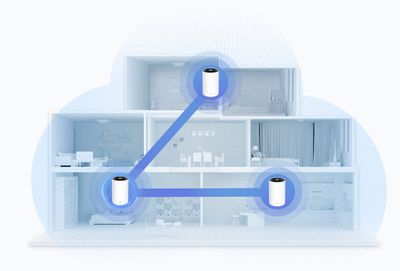 Deco X76 Plus
Wi-Fi 6E offers the features and capabilities of Wi-Fi 6, including higher performance, lower latency, and faster data rates, extended into the 6GHz band. The additional spectrum will provide a lot more airspace beyond existing 2.4GHz and 5GHz Wi-Fi, resulting in increased bandwidth and less interference for devices that support Wi-Fi 6E.

TP-Link's new Deco X96 mesh Wi-Fi system supports 6GHz, 5GHz, and 2.4GHz tri-band Wi-Fi for whole-home coverage at advertised speeds up to 6,600 Mbps. TP-Link says the system uses artificial intelligence to learn your network environment and provide ideal Wi-Fi for your home. A two-pack provides Wi-Fi coverage across up to 6,000 square feet of space, and up to 200 devices can be connected without performance degradation.

For smart home enthusiasts, the Deco X76 Plus is another Wi-Fi 6E mesh system, but it also acts as a smart hub, bringing together various Zigbee, Bluetooth, and Wi-Fi smart devices in the TP-Link Deco app. The router delivers advertised speeds up to 5,400 Mbps with tri-band Wi-Fi, and it has the same artificial intelligence capabilities as the Deco X96. A two-pack provides Wi-Fi coverage across up to 5,500 square feet of space.

For those looking for a traditional router, TP-Link's new Archer AX96 supports Wi-Fi 6E for advertised speeds up to 7,800 Mbps with tri-band Wi-Fi. TP-Link says the router has so-called "Smart Antennas" that boost coverage and improve wireless connections. Other key features include a 1.7 GHz quad-core CPU that manages throughput for reduced latency, one 2.5 Gbps WAN/LAN port, one Gigabit WAN/LAN port, and four Gigabit LAN ports.

A CES 2021 Innovation Awards Honoree, the Deco Voice X20 is a mesh Wi-Fi system with an Alexa-powered smart speaker for voice control, smart home management, and music streaming. This system supports 5GHz and 2.4GHz Wi-Fi only.

TP-Link says all of these new products will become available throughout 2021, but it has not disclosed pricing at this time.

Apple does not offer any devices with Wi-Fi 6E support, but iPhone 13 models could be the first.

A CES 2021 Innovation Awards Honoree, the Deco Voice X20 is a mesh Wi-Fi system with an Alexa-powered smart speaker for voice control, smart home management, and music streaming. This system supports 5GHz and 2.4GHz Wi-Fi only.

That immediately disqualifies it from any consideration.
Score: 6 Votes (Like | Disagree)

cmaier
Instead of WiFi 6, 6E, 5, whatever, router makers should instead be required to provide RB-##. Where ## is the number of days you can go before you have to reboot the damned thing to get it working right again.

I’ve tried pretty much every brand in the last few years, and nothing has been as rock solid as the old discontinued apple airports. Even with the synologys I’ve settled on, every 6 months or so I need to reboot everything to get full wired throughput back, and to get the mesh points working right, etc.
Score: 4 Votes (Like | Disagree)

Judging by the range of 5ghz vs 2.4 I would rather have lower not higher

6GHz will be only used for backhaul, i.e. between the mesh nodes. so it doesn't eat up the available client facing spectrum/airtime. this implies a 3-radio design, which is a kind of standard among higher end mesh setups.
the other thing is, that also the client device's specs contribute a lot to the excellent/miserable performance, so high end mesh setups also have dedicated, purpose tuned antennas for backhaul, this way (i.e. using higher gain antennas) they can overcome the subpar signal-propagation. and since mesh nodes will be talking to other mesh nodes, both ends will have tuned antennas, so both backhaul data transmission and reception will benefit from this.
Score: 2 Votes (Like | Disagree)

How is everyone getting on with their mesh networks? Are they as great as claimed?

I'm pretty happy with my setup in my apartment. Running a TP-Link Archer router and mesh network "extender" (operates as mesh network, not separate network extender). One downside to mesh networks is the bandwidth is cut in half for each extender away from the main router you are in the system, but you can have 600Mbps internet for $60 a month meaning you're still getting 300Mbps even at the furthest corners of your property (more than enough speed for any user).
Score: 2 Votes (Like | Disagree)
Read All Comments

Thursday March 3, 2022 6:46 am PST by Mitchel Broussard
Today we're tracking a discount on Apple's 2020 64GB Wi-Fi iPad Air, available for $539.00, down from $599.00. This sale is available in Space Gray, Green, and Sky Blue. All models are in stock and shipped directly from Amazon. Note: MacRumors is an affiliate partner with some of these vendors. When you click a link and make a purchase, we may receive a small payment, which helps us keep the...
Read Full Article • 12 comments