While we're still many months away from the next-generation "iPhone 13" lineup, Barclays analysts Blayne Curtis, Thomas O'Malley, Tim Long, and their associates have outlined a few expectations for the devices based on discussions with multiple Apple suppliers. 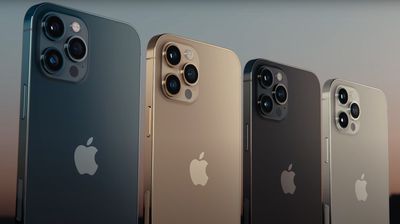 "The 6 GHz band will perhaps be the most disruptive boon for Wi-Fi users in the last 20 years," said Vijay Nagarajan, an executive at chipmaker Broadcom, in January. "This swath of spectrum, when coupled with Wi-Fi, will power new consumer experiences on smartphones, AR/VR devices and wearables we haven't even yet invented."

"Wi-Fi 6's growth into the 6 GHz spectrum is a game changer for two reasons – the availability of the additional channels and the ability to finally use 160Mhz for high bandwidth applications like AR and VR," said Cisco executive Jayanthi Srinivasan.

Earlier this year, the FCC adopted rules that make 1,200 MHz of spectrum in the 6 GHz band available for unlicensed use in the United States, paving the way for the introduction of devices supporting Wi-Fi 6E.

The analysts also indicated that audio chipmaker Cirrus Logic will supply a new power conversion chip for at least some iPhone 13 models, although it is unclear if this move would have any obvious consumer-facing benefit.

As for the iPhone SE, the analysts believe Apple has no plans to refresh the device in the foreseeable future. The analysts said that while they had heard about a potential larger-screen iPhone SE, rumored to feature a 5.5-inch or 6.1-inch display, the device was not mentioned in any of their discussions with Apple suppliers. In April, well-known analyst Ming-Chi Kuo said the larger iPhone SE was delayed until the second half of 2021.

edwrap
It's my understanding that 6 GHz will penetrate through walls and other obstructions even worse than 5 GHz (which was already worse than 2.4 GHz), And will be able to utilize less transmission power (18 dBm vs 30 dBm, according to a Google search), so be prepared to need more routers and access points if you actually want to make use of this. I'm sure mesh router manufacturers are salivating.
Score: 11 Votes (Like | Disagree)

Pointing out the obvious, it was Broadcom announcement [1] that literally confirms this ( So this "news" isn't really "new" ). Being out early this year ( 2020 ) meant it will make it in time for 2021 iPhone.

This is on 7nm in case you are wondering. And yes, this is expected due to the complexity of WiFi 6E.

WiFi 6E, is basically Full WiFI 6 + 6Ghz Spectrum. This is a new spectrum that is dedicated only to WiFI 6. The keyword is only, because there will be no interference like on 2.4Ghz and 5Ghz with neighbours having older WiFi signal downgrading your experience.

It also brings the opportunity for vendors ( And AFAIK, ALL vendors ) to properly implement WiFi 6 Spec. Things like OFDMA there were not enabled on early version, 160Mhz Channel, 80+80Mhz Operation etc. ( It doesn't mean WiFi 6 is no good, it is just the first version was over promised and under deliver, at least by main stream media )

So you can think of WiFI 6E as really the original WiFi 6 we were promised. And you should finally be able to get over 1Gbps WiFi Speed in real world in an ideal situation.

And in case you missed the news, all M1 Mac, Macbook and Mac Mini only has 2x2 Antenna, unlike their predecessor with 3x3. WiFi 6E will partly solve that problem.

That is all the good news, now the bad news.

6Ghz Spectrum is only available in the US. With pretty much all other parts of the world not decided or wont make it in time for iPhone 13 debut. Which means just like 5G mmWave, it could be a US only again.

And because of regulation, normally the Phone / Tablet has go through certification before supporting 6Ghz. Which means you cant expect to have 6Ghz "turn on" later via Software update once the regulations are in place.

And of course, you WILL need a WiFi 6E router to enjoy all the advantage.

nepalisherpa
I doubt Wifi 6E would make the experience any better. Wifi is already fast enough for a mobile device!

Edit: I want to add that speed is not the only factor I was thinking. Even with all the features, it sure won't be a "game changer" enough to upgrade.
Score: 10 Votes (Like | Disagree)

mikethebigo
My crummy Spectrum internet does not care how amazing my home's wifi is lol.
Score: 9 Votes (Like | Disagree)
Read All Comments