A set of schematics and programming instructions for a prototype version of the Apple II home computer recently sold for $630,272 from RR Auction, the company said today. 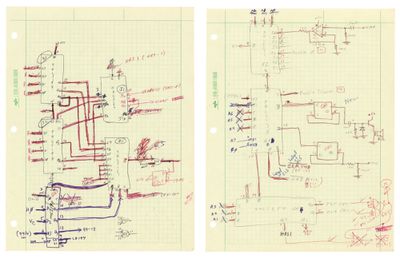 Wozniak added notations, circuit changes, and programming notes to these pages as he hand-wired the Apple II prototype, and he confirmed their veracity prior to the auction.

Accompanied by a signed letter of provenance from Wozniak: "These documents, circa 1975, are my original Apple II prototype schematics and programming instructions. They are precious. On these work-in-progress diagrams, you can even see my breadboarding technique, where I'd go over drawn connections in red as I soldered the wires in. At the time, I favored using a purple felt tip pen for writing, so it's interesting to see these notes decades on. The prototype was hand-wired while I was still an engineer at Hewlett-Packard's Advanced Product Division, where I was involved in the design of hand-held calculators."

Other items sold at the auction include a "Battleship" keyboard signed by Steve Jobs and Steve Wozniak that went for $74,535 and a Steve Jobs-signed Monsters, Inc cue sheet that went for $12,501.

Bremse
Someone should cut that Apple I into pieces and embed them in a custom iPhone so more people can enjoy it.
Score: 26 Votes (Like | Disagree)

Quicksilver867
I met Woz once. Very pleasant to talk to. Glad to have encountered the mind behind these things.
Score: 12 Votes (Like | Disagree)

zorinlynx
Did they at least scan this stuff in its entirety so it can be posted on archive.org for historical preservation?

Auctioning this stuff off to a private buyer who might not do that and have it stay in a personal collection unseen for years is irresponsible without scanning it first.
Score: 10 Votes (Like | Disagree)

lkrupp
I wonder what Michael Dell’s hand written notes showing how he picked parts of the shelf to assemble the first Dell would go for? $1?
Score: 8 Votes (Like | Disagree)

The price of this type of stuff is so ridiculous. That is NOT going to be worth more than 630k in the future. So if it's not an investment, then I guess it's just something for rich superfans to hang on their wall

The moment Woz dies it will be 2x its current value.
Score: 7 Votes (Like | Disagree)

torontotim
"The prototype was hand-wired while I was still an engineer at Hewlett-Packard's Advanced Product Division, where I was involved in the design of hand-held calculators."

Queue the lawsuits ;)
Score: 7 Votes (Like | Disagree)
Read All Comments

Monday April 26, 2021 5:00 am PDT by Tim Hardwick
A ransomware group that last week stole schematics from Apple supplier Quanta Computer and threatened to release the trove of documents has mysteriously removed all references related to the extortion attempt from its dark web blog, MacRumors can confirm. The ransomware group known as REvil claimed last Tuesday that it had accessed the internal computers of Taiwan-based Quanta and managed to ...
Read Full Article • 105 comments

Tim Cook in Memo to Employees: 'There Has Never Been a Moment of Such Great Potential As This One'

Thursday April 1, 2021 10:22 am PDT by Juli Clover
Apple CEO Tim Cook today sent out a motivating memo to Apple employees to celebrate the 45th anniversary of Apple's founding, asking them to rededicate themselves to the original mission of Apple's founding - to redefine what technology can achieve and make people's lives better. Cook's memo was shared in full by French site MacGeneration. Cook said that there's never been a moment in...
Read Full Article • 178 comments

Monday April 12, 2021 2:34 am PDT by Tim Hardwick
Apple has in place stringent quality control standards on the assembly line floor to prevent mistakes in production, but that doesn't mean they don't happen. Images shared on Twitter reveal an iPhone 11 Pro with a misaligned Apple logo on the back of the device, a misprint that is said to be as rare as 1 in a million. The images, posted by Internal Archive, clearly show the Apple logo is ...
Read Full Article • 49 comments

Tuesday April 27, 2021 2:31 pm PDT by Juli Clover
As Epic Games prepares for its upcoming bench trial with Apple, the company has today published depositions that it conducted with several executives, including current iTunes chief Eddy Cue and former software engineering chief Scott Forstall. As someone involved with the App Store since its inception, Cue was asked many questions about how the store runs, and he was also queried on whether ...
Read Full Article • 130 comments

Monday November 30, 2020 11:21 am PST by Juli Clover
There are a limited number of original Apple-1 computers left in the world, and every so often, one comes up for auction. Available starting December 10, a new Apple-1 auction will see RR Auction selling a functional Apple-1 computer with an original box that's been signed by Steve Wozniak. Apple-1 machines were the first computers produced by Apple and sold by Steve Jobs out of his parents' ...
Read Full Article • 74 comments

PSA: Apple is Updating Old Apps With Latest Signing Certificate Ahead of iOS 14.5

Friday April 16, 2021 7:55 am PDT by Hartley Charlton
Users may notice that a number of very old apps are receiving new App Store updates. Instead of fixing bugs or adding new features, the updates are occurring because Apple is updating developers' apps that use a legacy App Store code signing certificate with the latest version so that they can launch correctly in the upcoming releases of iOS 14.5 and iPadOS 14.5. Developers of affected apps...
Read Full Article • 65 comments

Tuesday April 13, 2021 12:50 pm PDT by Joe Rossignol
Last week, Apple announced the launch of its Find My network accessory program, allowing compatible third-party accessories to be tracked in the ‌Find My‌ app right alongside Apple devices. The first products that work with the Find My app will include the new Chipolo item tracker, new Belkin earbuds, and two electric bikes from VanMoof. Given that VanMoof is based in the Netherlands, Dutch...
Read Full Article • 56 comments