Qualcomm today shared benchmark results for the Snapdragon 888 SoC that will be used in flagship Android phones coming out in 2021, and it's not able to keep pace with the A14 chip in the iPhone 12 models, nor the A13 in the iPhone 11.

AnandTech compared Qualcomm's benchmarks to benchmarks of Apple's devices, with the ‌iPhone‌ winning out in Geekbench 5 and GFXBench tests. 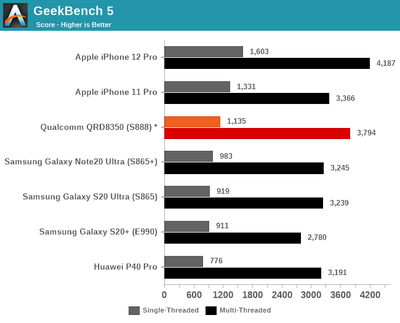 In the GFXBench test, which measures GPU performance, Samsung scored an 86 (in frames per second), compared to the ‌iPhone 12‌ Pro's 102.24. Sustained performance is unknown as of yet and will depend on the chip's power consumption, but AnandTech believes the Snapdragon 888 could ultimately win out over the ‌iPhone‌ if power consumption is competitive.

While the Snapdragon 888 doesn't look like it'll match the peak performance scores of the A13 or A14 SoCs used in Apple's iPhones, sustained performance will depend quite a bit on the power consumption of the chip. If this lands in at between 4 and 4.5W, then the majority of flagship Android phones in 2021 will likely be able to sustain this peak performance figure and allow Qualcomm to regain the mobile performance crown from Apple. Otherwise if the chip has to significantly throttle, then 888 will probably fall short of retaking the crown. But even if that's the case, for Android users it shouldn't matter too much: the generational leap over 2020 phones would still be immense, and by far one of the largest GPU performance leaps Qualcomm has been able to achieve to date.

AnandTech says that as these benchmarks were provided by Qualcomm and not independently obtained, we have to trust that Qualcomm's numbers are accurate, but the site expects the figures to be "accurate and reproduced in commercial devices."

macsplusmacs
Breaking: Microsoft to buy Qualcomm so their ARM windows 64bit version can run at least half the speed of iOS!
Score: 33 Votes (Like | Disagree)

I am curious what are the real-world benefits to the average iPhone user for a faster CPU? I am still using XS Max and really have not seen an advantage to upgrade in my case. That doesn't mean one exists and perhaps I am missing it.

lol you have asnwered your question, advantage is that you are still using your XS Max because at that time it was powerful enough and it runs smooth even today and will run great extra couple of years!
Score: 25 Votes (Like | Disagree)

The import thing is..... it's Catching up! And that's awesome!
Because Apple is screwing up a lot lately and my latest Android phones are rock solid
I also don't like the direction of the Mac with ARM. So GO INTEL.

I bought the cheapest M1 MacBook air, it doesn't run everything but Logix X pro rocks on it!
Everything opens fast, its battery lasts forever and no fan! It's amazing. I still use my Intel macs
but its a great direction that Apple is going in!
Score: 15 Votes (Like | Disagree)

I am curious what are the real-world benefits to the average iPhone user for a faster CPU? I am still using XS Max and really have not seen an advantage to upgrade in my case. That doesn't mean one exists and perhaps I am missing it.

Longevity. These processors are impressive and certain Apps definitely benefit from the horsepower, but I think it’s more for future proofing. I think it’s why Apple supports their devices so long.
Score: 15 Votes (Like | Disagree)
Read All Comments