Multiple rumors have indicated that Apple is working on a refreshed version of the Apple TV, and a report today by Nikkei Asia Review adds to speculation that Apple will release a new version of its set-top box next year. 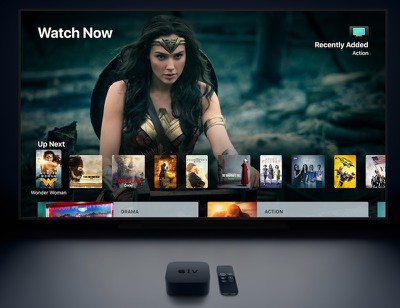 Apple is also preparing an aggressive production schedule for its high-end computers, including the MacBook Pro and iMac Pro, for 2021, two other people familiar with the matter said. The company is in the midst of replacing Intel central processors in its computer lineups with self-designed CPUs built using technology from British chip designer Arm. Apple already introduced three MacBook models powered by its M1 central processor in late 2020 and announced it will take about two years to fully transition to CPUs designed in-house. The U.S. tech giant is also working on a new Apple TV, a home entertainment device for video-on-demand services, for next year, one of the people said.

Rumors have been bubbling all year about a new ‌Apple TV‌ ever since signs of the unreleased device were spotted in an iOS 13.4 beta in January. At the time, rumors suggested it would feature an A12 chip and come in 64 and 128GB storage sizes.

Since then, there have been signs of a new ‌‌Apple TV‌‌ with an updated remote in iOS 14 code, and leaker Jon Prosser has suggested the new ‌Apple TV‌ will be equipped with an A12X Bionic chip. However, another rumor claimed it will use an A14 chip, the same chip used in the iPhone 12 lineup.

Beyond possible remote changes, storage capacities, an updated processor, and a "T1125" codename, there's little else known about the new ‌Apple TV‌, although Prosser recently suggested it could include a U1 chip that enables Ultra Wideband support for improved spatial awareness between devices.

Given the spate of rumors, one theory is that Apple is working on multiple ‌Apple TV‌ set-top boxes, which could explain the discrepancy in chip rumors. Whatever Apple's plans are, a new ‌Apple TV‌ next year feels like a safe bet – Apple hasn't updated the current ‌Apple TV‌ 4K since September 2017.

I do hope they change the remote for the Apple TV. It is worse than useless.

I've never had any issues with it... what exactly makes it useless?
Score: 18 Votes (Like | Disagree)

StrangeNoises
Being able to use Airpods Max Spatial Audio with it would be an obvious one, it's been a glaring omission with the current Apple TV units (which others have noted already) that's so glaring one presumes it's because they lack some necessary hardware to do it. (I think that's not the U1?)
Score: 10 Votes (Like | Disagree)

and 1989 others
I do hope they change the remote for the Apple TV. It is worse than useless.
Score: 8 Votes (Like | Disagree)

I think this is really the whole point. With the M1, Apple now has a real GPU they can put on the SOC. The follow-ups to the M1 are supposed to have GPU's like high-end independent graphics cards. I think Apple's going to really try to make Apple TV a real 3rd major gaming console.
This would have sounded ludicrous a few years ago... because they'd have had:
[LIST=1]
* A likely insurmountable "chicken and egg" problem with a whole new system - no developers making big-name games, so nobody would buy the system for gaming. And with nobody buying the system for gaming, no developers would make big-name games for it.
* No particular "edge" over the competition. They'd have needed to design it with the same Intel/AMD chips and NVIDIA/ATI CPU's and common motherboards, RAM, etc as Sony and Microsoft. What would be the point in Apple trying to launch a new console as opposed to any other random company. Where's the value proposition?

Now both of those have changed. Major developers are already making big-name games for the iPhone. Porting to Apple TV will be relatively easy. And they'll at least have a big install base of AppleTV users readily available to kickstart the chicken/egg problem.

And on the hardware side, they can do an M1-like SOC with an even bigger GPU and make something that's competitive or even beats Playstation and Xbox hardware for way cheaper than Sony and Microsoft make their consoles. I think Apple can throw console-class performance into Apple TV size, power, and price-range, due to their custom SOC's.

I think it would be a massive business blunder if they don't go after becoming the 3rd big gaming console. I think the console wars are about to change.

And if Apple does a console that is as good or better than PS5 or Xbox Series X for less money, plus it's an Apple TV, then I think they'll do very well in that segment. It'll take a while to gain market share, but they'll be in a strong position.

Also, games developed for the new console would run on M1 Macs, further expanding the potential player base... and allowing Apple to try to compete with Microsoft for gamers again. It's going to be ridiculous if, over the coming years, the big games start being released for Macs, and Apple's chips are so good that off-the-shelf Macbooks and iMacs are beating system builder's nutso cutting-edge SLI towers.
Score: 7 Votes (Like | Disagree)
Read All Comments

Tuesday December 22, 2020 12:32 pm PST by Joe Rossignol
In his Fully Charged newsletter, Bloomberg's Mark Gurman today briefly reiterated that Apple plans to release a new Apple TV with a stronger gaming focus, an updated remote, and a new processor at some point next year. Gurman has previously indicated that Apple is working on a new remote with Find My-like capabilities, which would make it easier to find when misplaced. As part of the gaming...
Read Full Article • 230 comments