Apple in March released new 13.4 software designed for the HomePod, alongside of the release of iOS 13.4 and tvOS 13.4. 9to5Mac recently looked at the HomePod code and says that Apple made a curious change with the new software -- the HomePod operating system is now based on tvOS instead of iOS. 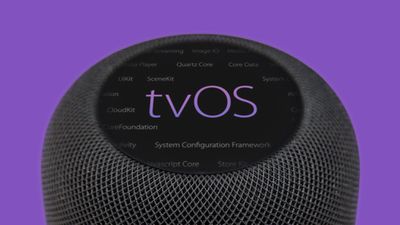 watchOS, tvOS, and the software that run on the HomePod are all variants of iOS, but each one is differentiated by tweaks made for the device the software is intended to run on, featuring unique interfaces, APIs, and more.

9to5Mac believes that shifting the HomePod software to a tvOS base has the potential to save Apple some work, as both the Apple TV and the HomePod are always-on devices that are plugged in to power and won't need the same optimizations as versions of iOS. Both devices also operate as a Home hub for HomeKit, which may also be a key reason why the two now share code.

It's also possible that iOS 14 will end support for devices with the A8 chip, such as the iPad Air 2 and the iPad mini 4, and the HomePod is equipped with an A8 chip. Due to the possible end of support in iOS 14, swapping over to a tvOS base will allow Apple to keep pushing HomePod updates for the foreseeable future.

Rumors have suggested that Apple is developing a new smaller version of the HomePod that's more affordable, which is set to launch in 2020, and that's another possible reason for the code shift. 9to5Mac says that there are two new models of the HomePod referenced in iOS 13.4, though there is no additional information about them.

Just this morning, a Bloomberg report said that Apple is working on a new HomePod speaker that will be about half the size of the original, while maintaining the same design. Though it has faced delays, Apple is planning to launch the new HomePod in the second half of the year. It will feature a lower price the current HomePod, helping Apple compete with cheaper speaker options from companies like Amazon and Google.

On a separate but related note, 9to5Mac says that a "trusted source" has said that the next-generation ‌Apple TV‌ that's been rumored for months now could be equipped with the same A14 chip that Apple is planning to use in the iPhone 12, which suggests a fall launch for the device. Both a new ‌Apple TV‌ and an updated HomePod could perhaps see similar launch dates this September or October, but there's no concrete word on launch timing for either product.

maybe this new HomePod will be the new appletv, a smaller HomePod with an HDMI in the back of it

They could make one of those sound bars for your tv that also doubles as a HomePod and atv.
Score: 22 Votes (Like | Disagree)

Jar Jar Abrams
maybe this new HomePod will be the new appletv, a smaller HomePod with an HDMI in the back of it
Score: 21 Votes (Like | Disagree)

bartszyszka
Seems like "HomeOS" (or "homeOS") would make more sense as a name in that case. The OS that powers your home devices, Apple TV and HomePod.
Score: 17 Votes (Like | Disagree)

szw-mapple fan
An Apple TV/HomePod combo device down the road could definitely be interesting. The speaker can display output on the TV and serve as speakers for the TV as well.
Score: 16 Votes (Like | Disagree)

ipedro
I've always suspected that the HomePod would be the replacement for the AppleTV.

"AppleTV" as a name brand has moved to being software; the AppleTV app is just called "Apple TV" and Apple has moved to have it become ubiquitous on all platforms, on all TVs and TV boxes. There's currently a confusion when talking about "Apple TV" because it could both mean the app or the box. I believe that Apple is in the process of cleaning that up.

This is why I feel that the Apple TV (the box) will be phased out. In its place, you'll have HomePods as the centre of the home, not just for audio but for your TV and in your interaction with your entire home through Siri and HomeKit.

Apple has been working with TV manufactures to build AirPlay 2 into all TVs. This will play a central role in Apple's TV strategy going forward. Rather than an Apple TV box, you'll either simply AirPlay content from the Apple TV app on your iPhone, iPad or Mac to your TV directly, you'll use the Apple TV app built into every TV going froward or for the true Apple living room experience, you'll have a HomePod that will run tvOS and will AirPlay the video (both UI and content) to your TV.

The two missing components: first a remote for HomePod and second, an AirPlay Stick to enable AirPlay on all TVs that don't yet have it. This AirPlay stick would replace the tvOS Home screen with the Apple TV app home screen, which Apple has been moving to anyway.

Apps on tvOS has turned out to be a failed experiment. Most of the successful apps on Apple TV are simply content apps, that would better function as an Apple TV channel, rather than a self contained app with its own user interface. I think Apple will push towards that but first they'll have to win over Netflix and Disney both of which have wanted their own self contained apps.

I believe we'll see a big shift in the way that Apple deals with TV. First, they launched the content platform and now I think we'll see them move around the pieces in hardware, in which the new HomePod will play a central role.
Score: 13 Votes (Like | Disagree)
Read All Comments