Apple plans to introduce a new screen that allows users to view all of their installed apps in a list in iOS 14, with several sorting options available, according to code seen by 9to5Mac. A basic version of this feature already exists on the Apple Watch, as shown below. 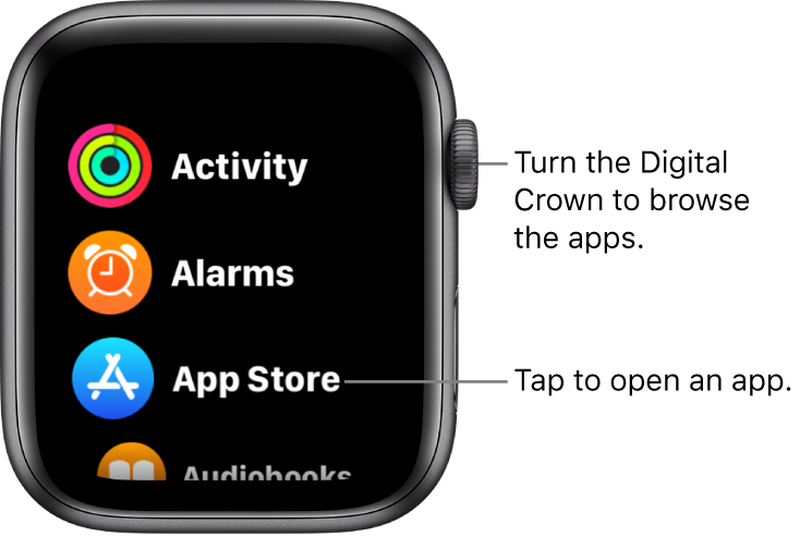 The list will presumably be in alphabetical order by default, with the report claiming that users will be able to set filters such as recently used apps or apps with unread notifications. This will provide users with a third way to view their installed apps beyond swiping through home screen pages or dragging down on the home screen and using the search function.

In a separate report, 9to5Mac claims that there is a possibility that third-party wallpaper packs will be supported in the Settings app on iOS 14, with Apple planning to introduce several new wallpaper categories to help sort through them. It is already possible to set any image as a wallpaper on the iPhone, iPad, and iPod touch, but this feature would provide users with countless wallpapers to choose from right in the Settings app.

iOS 14 is also expected to include new HomeKit features like face classification in HomeKit camera video streams, a new accessibility feature that can possibly provide haptic feedback for important sounds like fire alarms and doorbells, Alipay support for Apple Pay, and integration of Apple's "Shot on iPhone" challenges in the Photos app.

Last, 9to5Mac has uncovered evidence of a new version of the Apple TV remote in iOS 14, but no further details are known at this time.

Apple knew damn well what we wanted when we asked for a home screen redesign. And did they give it to us? No. Just this sad excuse for a "redesign"

Apple is taking it slow, measured steps and I appreciate that. iOS 14 sounds quite appealing to this point. Clean up the lingering 13.x issues and add in a few features, that would work for me
Score: 4 Votes (Like | Disagree)

After reading this same story on a different site, I just realized what this means.

No Apple, I do not want an android app drawer in iOS.

You will eat what you're given! Also curfew is at 9pm sharp.
Score: 3 Votes (Like | Disagree)

IIGS User
Can we make it so the Watch displays the time all night in nightstand mode? I leave my watch in one of those cheap cradles that uses the charging puck that shipped with the watch, and would like to be able to use it as a clock.

I can't be the only person who would want a feature like this...
Score: 3 Votes (Like | Disagree)

Rogifan
Here’s one thing I wish Apple would do: if you use folders, when you long press on an app (either inside or outside of a folder) it would give you an option to move to folder and then a list of folders. The current method of having to drag an app with your fingers into a folder is not a great experience. I also wish there was a place in settings where you could easily re-arrange apps in folders. Again, having to drag an app with your finger between pages within a folder is cumbersome. Half the time I end up dragging an app out of a folder because of my fat fingers. They could make this much better.
Score: 3 Votes (Like | Disagree)

The Game 161
Certainly not what you would think for home screen design.

falkon-engine
Android does this...... App drawers. It's high time Apple does this, because my home-screen is a cluttered mess.
Score: 3 Votes (Like | Disagree)
Read All Comments

Tuesday May 26, 2020 2:31 am PDT by Tim Hardwick
Apple will use a Lightning port instead of USB-C in the upcoming "iPhone 12," but it will be the last major series of Apple's flagship phones to do so, with models set to combine wireless charging and a port-less Smart Connector system for data transfer and syncing in the iPhone "13 series" next year. The above claim comes from occasional Apple leaker and Twitter user "Fudge" (@choco_bit),...
Read Full Article • 388 comments

Thursday May 28, 2020 8:13 am PDT by Eric Slivka
With the release of macOS Catalina 10.15.5 and related security updates for macOS Mojave and High Sierra earlier this week, Apple is making it more difficult for users to ignore available software updates and remain on their current operating system versions. Included in the release notes for macOS Catalina 10.15.5 is the following:- Major new releases of macOS are no longer hidden when...
Read Full Article • 274 comments